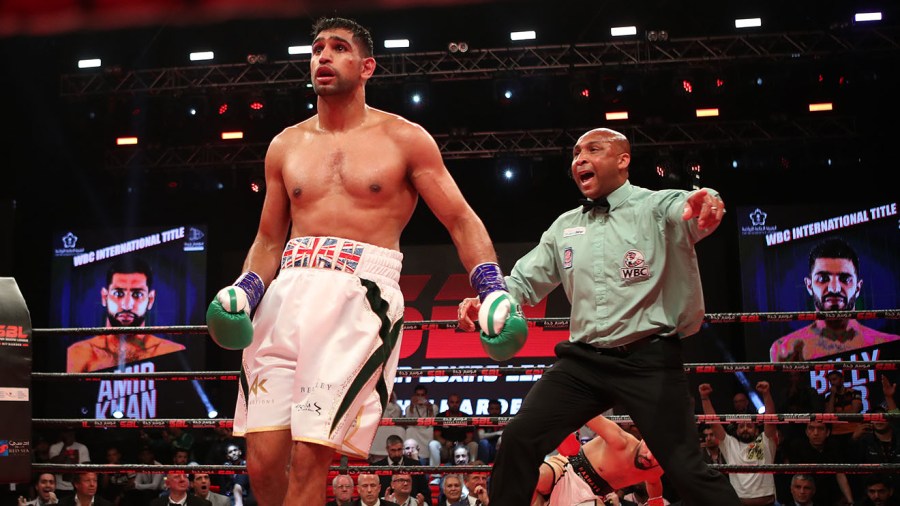 After easily disposing of Billy Dib, Amir Khan reveals that Pacquiao has received an offer 'too good to turn down.' Declan Taylor reports from Saudi Arabia

AMIR KHAN marked his first Arabian night with the expected victory and immediately looked ahead to an encounter with another boxing icon from this corner of the world.

The Bolton welterweight made easy work of little Billy Dib, a former world champion at 126lb, who had answered the call following a car crash involving India’s Neeraj Goyat.

Dib was only supposed to be boxing on the undercard at the King Abdullah Sports City but when Goyat was forced to withdraw from his scheduled clash with Khan as a result of injuries sustained in the accident, a new dance partner was required in the main event.

Whatever it was the pair served up in Jeddah, there was certainly no dancing involved. Khan used his height and reach advantage to dismantle Dib, stopping him at 1-06 of round four having already put him over in the second.

Regardless of the obvious mismatch, the 10,000 fans inside the brand-new arena loved every second of it. They can get used to far more nights like these with the Saudi Arabian General Sport Authority keen to fund professional boxing shows across the Kingdom.

And it is why Manny Pacquiao already has an offer on the table that promoter Bill Dosanjh described as “too good to turn down”. Regardless of how the Filipino senator fares against Keith Thurman this weekend (July 20), there is every chance that Saudi money could ensure he faces Khan back in Jeddah on November 9.

Of the potential showdown, Khan said: “Even if he loses to Thurman he’s still a recognised name. We are both superstars in the sport and the only man to make it happen is Bill.

“I was quite shocked that he made this fight happen in Saudi, I had to pinch myself. There was a time, I swear, where I was avoiding Bill.

“I wasn’t really taking it seriously because in the Middle East, fights never happen. Dubai has been talked about a lot but I’ve always been messed around.

“I used to have Bill calling me, I’d see him chasing me at the house and I’d be running out the back door. But they caught me, and I’m glad they did because we got it done. Now Pacquiao could be next.”

After the fight, Khan and Dib embraced in the former’s dressing room.
“When they suggested him as an opponent, I thought ‘You mean the Billy Dib I know?’ ” Khan said. “Not a lot of people know this but me and Billy are good friends.”

With a grin, Dib replied: “So why did you hit me so hard?”

In truth, Khan couldn’t miss and his opponent simply could not deal with the 2004 Olympic silver medallist’s speed and size.

He had already softened Dib up before a left hook sent him crashing to the canvas midway through the second. Dib clung on until the end of the round but more one-way traffic followed in the third. Then, when a pair of body shots left him in a crumpled heap, the towel came in with referee Ian John-Lewis already waving it off.

Dosanjh, the show’s promoter, said: “We will be back in November and it will absolutely be Pacquiao. The only way it doesn’t happen is if Al Haymon makes Mayweather-Pacquiao two and I think that’s unlikely.”

There was also an inside-distance win for Manchester’s Hughie Fury although the ending, after 2-07 of round seven, left a lot to be desired as 38-year-old Samuel Peterdecided he was unable to continue due to a shoulder injury.

He seemed to do himself a mischief when swinging wildly at Fury while he was being dragged away by referee Ingo Barrabas. However, despite seeming to hyper-extend his right arm, it was the left shoulder he held in apparent agony.

Either way, the big Nigerian Nightmare, who had already been docked a point for low blows, had made up his mind. It’s worth noting that the result provoked the first and only boos from the otherwise delighted crowd.

They had genuinely lapped up the earlier performances by US rappers Tyga and Rick Ross, neither of whom come cheap, but those intervals had meant that what turned out to be the most competitive fight of the night took place after the main event.

However, the widest win of the night was secured by rough, tough Venezuelan Michell Banquez, who beat up Acton’s pantomime villain Prince Patel for 12 one-sided rounds. Banquez, who does not speak a word of English, shrugged off all of Patel’s antics during the week and then made him pay with a relentless performance to claim the IBO bantamweight title.

Banquez’s all-action style did not give the Londoner a chance to breathe and, although much of his work landed on gloves and elbows, the pressure rendered Patel unable to get started whatsoever. It was a night of frustration and pain for the 26-year-old southpaw, who has spent the last two years building up his record by racking up wins in places like the Morrison’s Pub in Budapest.

But those outings did little to prime him for a real fight like this and, in the end, Lahcen Oumghar’s score of 118-110 was kind on Patel. John Rupert and Barrabas were closer to the truth with their 119-109 cards. Howard Foster was the ref.

The Verdict Just the start for boxing in Saudi, but it won’t always be this
easy for Khan.