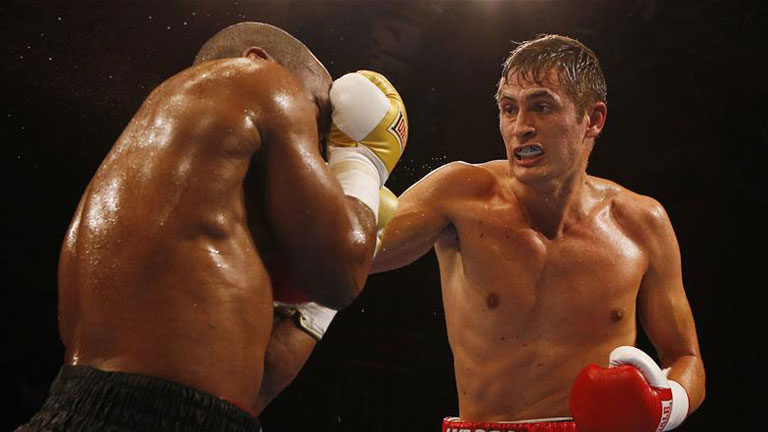 HOSEA BURTON will defend his British light-heavyweight title against Frank Buglioni on the undercard of Anthony Crolla’s lightweight title fight against Jorge Linares on September 24 at Manchester Arena.

Promoter Eddie Hearn won the purse bids to stage the contest earlier today, and swiftly announced it will take place on the Crolla-Linares bill.

It will be Burton’s first defence of the title after winning it against Miles Shinkwin in February, and his trainer Joe Gallagher is eager for Hosea to prove his mettle.

“Burton, apart from his gymmate [Callum] Johnson, is the best around domestically at light-heavyweight, below the likes of [Nathan] Cleverly,” he told Boxing News.

“He beat his sternest challenge in Miles Shinkwin to win the title. It was unfortunate the Tony Dodson fight didn’t happen, but the Buglioni fight is a good fight.

“Burton is coming on all the time, he’s had two fights since winning the title and it’s a shame it wasn’t Dodson and he hasn’t defended it.”

Burton was scheduled to defend his title against Dodson in Liverpool in May, but the fight was scrapped after Tony suffered a nasty injury.

The British Boxing Board of Control (BBBofC) ordered Burton to face Buglioni in their latest circular.

“Let’s hope he beats Buglioni and then I’m not sure who they’ll let him fight as a voluntary,” Gallagher continued.

“It’s a good fight, Buglioni is getting a surprise shot, he’s moved around a bit recently and this is an opportunity for him and a chance to win the British title.

“Burton won’t be giving up that belt without a fight, he’s an improving fighter and he’s very determined.”