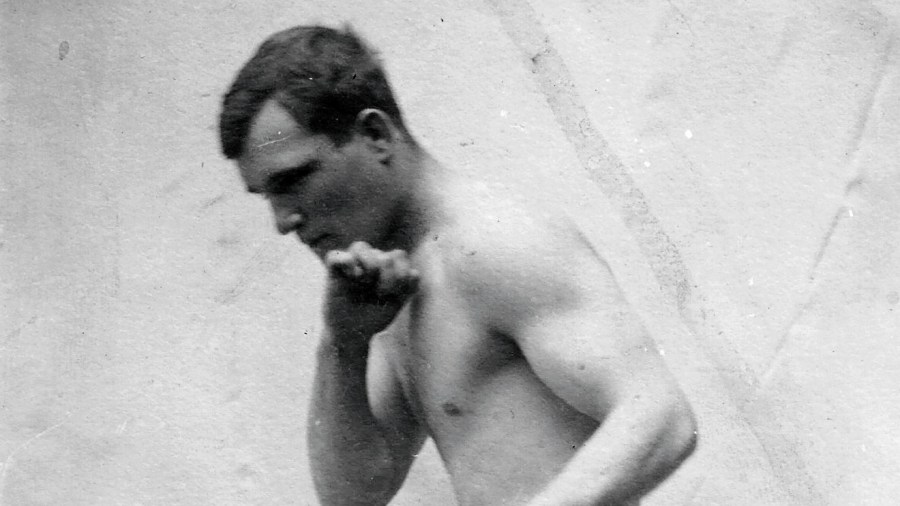 THE South Yorkshire town of Mexborough, perhaps best known for its coal-mining roots, was once a hotbed of boxing. Before World War II, fights were held there regularly and the town produced some top fistic talent, not least British heavyweight champion Iron Hague and British light-heavyweight titlist Harry Crossley. But arguably the most gifted boxer to emerge from Mexborough was one whose career ended tragically early. He was Harry’s elder brother, Herbert.

The third of four brothers, Herbert Crossley was born in Swinton, near Mexborough, on May 5, 1901. He had his first pro contest at age 16, beating a Rotherham youngster called Quinn in two rounds at Mexborough’s Empire Theatre in December 1917. Herbert had more bouts in and around Mexborough before fighting further afield in Sheffield, Doncaster and Manchester. In July 1919, he won a novices’ heavyweight competition at British boxing’s HQ, the National Sporting Club in Covent Garden.

While still in his teens, Crossley beat British light-heavyweight title challenger Harry Curzon, ex-titlist Harry Reeve and future champion Tom Berry. He also drew with reigning British middleweight champ Tom Gummer and beat future British and European middleweight king Gus Platts, albeit with a size advantage over Gummer and Platts. Crossley worked for a time at the Manvers Main Colliery in tandem with his prize-ring career.

At 5ft 10ins, Herbert was a small heavyweight, even by the standards of the day. He was not a naturally ferocious fighter – his success was built on scientific boxing. He was never knocked out nor did he win a fight by knockout, but he compensated for this lack of a KO punch with speed, stamina, cleverness, pluck and patience, as well as an ardent devotion to his craft.

After seeing him box in London, the veteran American manager Charlie Harvey urged Herbert to come to the States. Although reluctant at first, when Jimmy Wilde gave him the same advice, he agreed to a short US trip. He set off alone on August 20, 1921 aboard the Cunard liner Scythia, joining a party of British boxers already in the States – including Gus Platts and Joe Conn – about three weeks later.

Under the care of Harvey, Crossley trained at New York’s famous Grupp’s gym on 116th Street and Eighth Avenue where the fighters worked out before members of the public, who paid a quarter to watch them train and spar. Harvey’s fighters took an instant liking to the young Mexborough boxer, who got first-class tuition and sparring from such top-notchers as Jim Coffey, Bartley Madden, Mike McTigue and Frank Moran. Moran, who had fought Jack Johnson for the world heavyweight crown, sparred with Crossley most days and predicted a great future for him.

There was no mollycoddling the Brit, however. His first US fight was against future world heavyweight champ Gene Tunney, who outpointed him on September 26 over the odd distance of seven rounds, the bout being shortened to fit the show’s time schedule. In a letter home, Herbert admitted that Gene deserved the decision. But after losing his next bout, against Al Roberts of Staten Island on November 9, Crossley wrote in a telegram, “Beat Roberts. Robbed of decision”, and most ringside reporters agreed with him.

That was the final fight of Herbert’s promising career. The next day he fell ill and spent several days in bed with flu. As his condition worsened, he was admitted to New York’s Roosevelt Hospital. Despite receiving a blood transfusion, he died there on November 20 from septicaemia, aged just 20. His body was embalmed and sailed back to Britain where the stunned people of Mexborough gave him a grand funeral befitting his talent and popularity in the town.

Charlie Harvey was so impressed with Herbert, before his untimely death he had persuaded him to stay in America for another two years. In a letter to the Crossley family, Harvey wrote poignantly: “I want you to know the real esteem and high opinion that Herbert was held in here, and everybody with whom Herbert came in contact both respected and liked him, because of his straightforward, simple, honest ways, and likeable disposition. While only a boy in years, he had the highest and best of principles…

“He had unquestionably a big career ahead of him, as he had improved a thousand per cent since his arrival here, and would absolutely have made his mark in the business. My personal opinion of the boy cannot be described in words at my command, but I will simply say he was a man, every inch of him, and in every way.”

Herbert’s obituary in the South Yorkshire Times described him as “amiable, mild-tempered, well-behaved, a total abstainer, very fond of his home and family, and caring for nothing but them and his ring career. He was not the ‘roaring blade’ we are accustomed to associate with pugilism but quite modest and unassuming.”

In Britain, Herbert was being talked of as a possible future British heavyweight champion. I suspect, though, that he may have done better by dropping to light-heavyweight, the weight at which his younger brother Harry found fame. Eight years after Herbert’s death, almost to the day, Harry brought glory to Mexborough by winning the British light-heavy crown from Frank Moody. I’m sure he raised a glass that evening for his late elder brother.