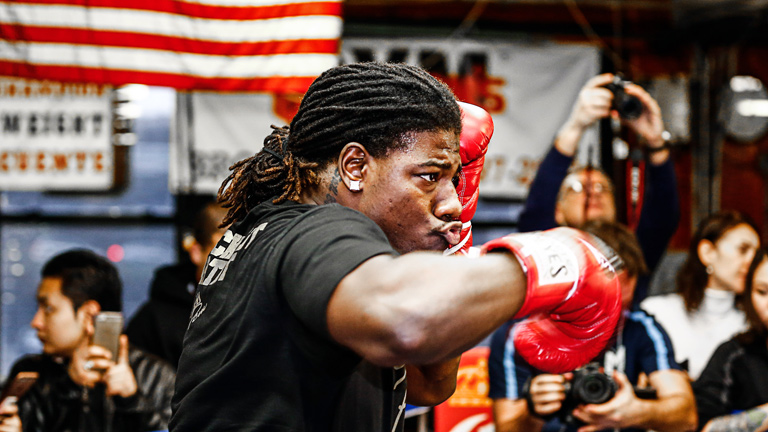 HENRY TILLMAN, who won an Olympic gold medal in 1984 and challenged Evander Holyfield for a version of the cruiserweight title three years later, is now co-trainer of new IBF heavyweight ruler Charles Martin.

Most famous, perhaps, for his three fights with Mike Tyson (two amateur victories in the Olympic trials and a pro defeat) Tillman is now guiding a fighter who, he says, “has it all.”

Here Tillman speaks on what’s next for “Prince” Charles:

Q: How long have you been with Charles Martin?

Henry Tillman: “I’m real close with his other co-trainer, Jamal [Abdullah], we’re both working with Charles. We’ve been together for six or seven years now, right since his amateur days. We’re currently looking for a new gym, as the other one, the plot was sold. Right now we train out at Big Bear.”

Q: It was an unfortunate end to the fight last Saturday, when Charles won the IBF title against Glazkov. How happy were you with Charles’ performance though?

H.T: “I think Charles was on his way to a KO victory, it was just a matter of time. I liked the way he picked his shots real well, he never wasted anything. He wasn’t going to go out there and blow himself out, he was pacing himself for four or five rounds and then [he’d] come on. Glazkov came into the fight with a lot of amateur and pro experience. I hope he recovers, that was a nasty thing, that was a freaky thing [with the knee injury]. He’s a good guy and we hope he can get his career back on track.”

Q: What next for Charles?

H.T: “I’d like to see him have at least two more fights this year, before the mandatory [defence]. It’s a team effort and we will all sit down and talk about who and what next. But the division is wide open and exciting right now. It’s great that you have all this young talent coming up, with each guy trying to be the one to break out as the best. It’s funny though, ’cos right now we’re all sick with colds (laughs). I’ve got a bad cold, Jamal has a cold; the only one who isn’t sick is Charles (laughs).”

Q: In your opinion, who is THE best heavyweight out there today?

H.T: “Well, you have a lot of talent, around ten or 15 guys that are very formidable. You have [Luis] Ortiz the Cuban, you have [Anthony] Joshua who is a young guy coming up, Tyson Fury has the belts, plus you can’t count out Klitschko. With Klitschko, as long as he was at the top, maybe it will prove to have taken a loss to get him motivated again to get back up there.”

Q: In the Fury-Klitschko rematch, off the top of your head, who wins?

H.T: “It depends on which Klitschko shows up, how much fight he has. But I think Fury is too big, too strong and too young for him. He [Klitschko] had never fought a guy bigger than himself before.”

Q: And how good is Deontay Wilder?

H.T: “I think Wilder is getting better and better in every fight. Charles is the same, he’s always improving. Charles has a good eight to 10 years [ahead of him] in the game. He has hand speed, movement, power in both hands and Charles always had good ring generalship as an amateur. I want him to be busy this year. We are having a victory party for him tomorrow in Hollywood. Everyone wants to talk to him right now, it’s kind of crazy.”

Q: You had a fine amateur and pro career yourself and have made the transition to trainer. Have you any other fighters you are currently working with?

H.T: “Oh yeah, we have some good guys. Some are still amateur, some are pro. We have four heavyweights, two of them are amateur and two are pro. One guy is 2-0 [as a pro]. We have a great team but right now it’s all about Charles. We wanna unify [the heavyweight titles].”