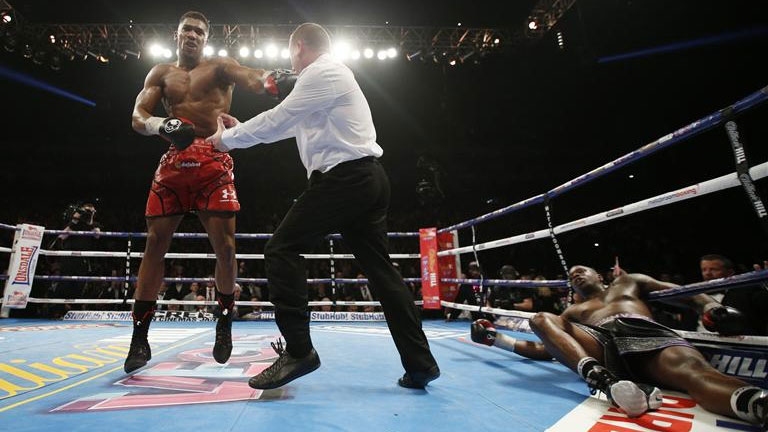 HENRY TILLMAN, trainer of IBF world heavyweight champion Charles Martin, insists Anthony Joshua is ‘nothing like’ Mike Tyson ahead of his charge’s fight with the Londoner.

Tillman, a heavyweight Olympic gold medallist, fought Tyson three times, twice beating him as an amateur before losing to Mike in one round as a pro.

Currently boasting a 100 per cent knockout ratio, Joshua has been likened to Tyson by his promoter, Eddie Hearn, though Tillman rejects the comparison.

“No way, he’s nowhere near Tyson,” he told Boxing News.

“You’ve seen Tyson fight, and I fought the man three times! Tyson comes out like bam! He [Joshua] don’t come out like that. He’s more like Frank Bruno.”

Tillman can attest to Tyson’s fast starts, given how quickly Mike stopped him in 1990.

Jamal Abdullah, who helps train Martin, disagreed with the Bruno comparison, instead claiming the 26-year-old wrecking ball reminds him of a young Lennox Lewis.

He said: “He’s not like Tyson. He’s a big kid and if you want to match him with a style, he’s a little more like Lennox Lewis.”

Having both worked with Martin since his amateur days, Tillman and Abdullah are relishing their man’s chance on the big stage.

So far, Martin has operated on the fringes of the public’s awareness but was flung into the limelight when he won the vacant IBF title in January.

The build-up to his fight with Joshua, one of the highest-profile fighters in the UK, has been a media frenzy.

Tillman is glad Martin remains a fairly unknown quantity. He and Abdullah have also studied the extensive amount of footage available on Joshua – all of his professional contests have been shown on Sky Sports/Sky Sports Box Office – including his last bout against Dillian Whyte.

Joshua was visibly wobbled by a left hand in the second, though went on to finish Whyte in the seventh, and Team Martin take confidence from what they saw.

“It’s a good thing not many people know who Charles is,” Tillman said.

“I wish we could keep it like that forever, but after this fight it’ll be impossible.

“He showed that [vulnerability] against Whyte, he got hit with a shot and stumbled. If Charles hits him with a shot like that, it’s curtains.

“Charles is a boxer-puncher, he’s elusive, he’s kind of awkward. Kind of like a giant Michael Spinks, but southpaw.”

As well as the relative anonymity Martin has travelled to the UK with, he is also a fairly heavy underdog with the bookies, despite being the champion. For Abdullah, it’s another blessing in disguise.

He said: “We like being the underdog. It makes what we do a lot easier. It’s less pressure and the less pressure you have on a fighter, the better performance you get from then.”

When probed on how training up at Big Bear has gone and on what they make of Joshua as a fighter, ‘The Odd Couple’ as they like to call themselves, were respectful of the Olympic champion but feel he has been rushed ‘too quickly’ by his team.

“We didn’t focus on Charles, we focused on Joshua. Every opponent is different, we know Charles, so we sat down and mapped out how to beat Joshua,” Abdullah said.

“You just take Charles and lead him in. Most fighters in the world, you can’t do that because they get personal thinking they know it already. He takes it all in.

“I think Joshua still needs some training. He’ll be a force to be reckoned with though.

“He’s something that England needs, but at the same time we feel they rushed him. But he’s stepped up to the plate. We look at this as a golden opportunity for us. Charles said, when he leaves here he’ll have a million more fans.”