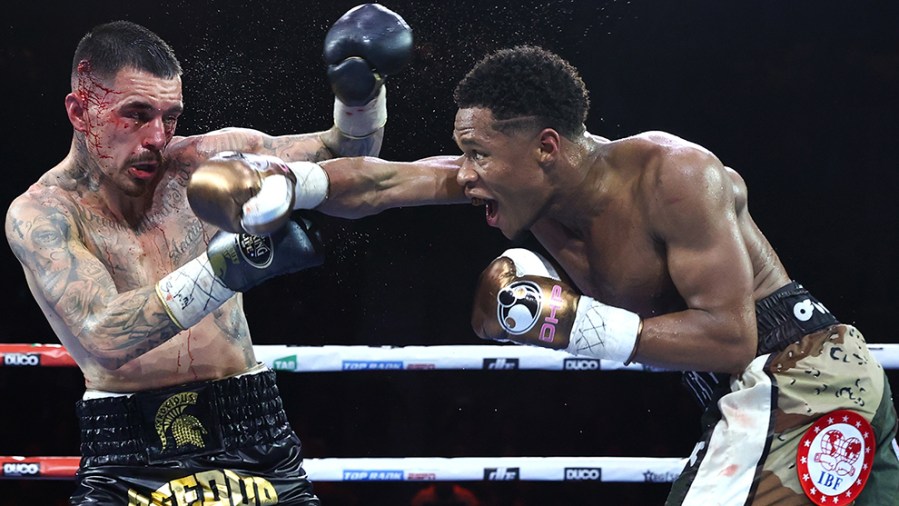 It was a rematch ordered by a contract rather than public demand, but Devin Haney confirmed his superiority over George Kambosos second time around, writes Sean Nam

It was deja vu all over again.

Kambosos, who, in an apparent attempt to turn over a new leaf, ditched both his longtime trainer and manager going into the fight, promised to flash a far more aggressive style. And it appeared, initially, he was on track to do so, after 29-year-old landed a booming overhand right in the opening round that caught the 23-year-old’s attention. But Haney — bigger, longer, quicker — would not absorb too many punches like that over the course of their fight. Haney quickly took control of the the pace and rhythm, keeping the Aussie at bay with the jab and dishing out punishment with the right hand. By the end, Kambosos was wearing a ghastly red mask.

Judges Leszek Jankowiak, Craig Megcalfe, and Manuel Oliver Palomo believed they saw an even more dominant fight from the clinical Las Vegan denizen than in the first fight, turning in scorecards that read 119-109, 118-110, and 118-110, respectively. (Scorecards for the first fight favored Haney by a slightly smaller margin: Two judges had it 116-112, while the other had it 118-110).

A return bout no one had been calling for, Haney-Kambosos II was essentially a pre-determined affair because of the gulf in talent between the two fighters. Haney, of course, had no choice but to participate in the matter, since Kambosos had a contractual prerogative, which he immediately invoked after the loss in the summer. The rematch clause — that favorite cudgel among boxing promoters to protect their investments — was part of a litany of business terms that Haney had to agree to earlier this year in order to get the chance to swap punches with Kambosos, who at the time held three of the lightweight belts.

If Haney had inoculated Kambosos with the jab in the first fight, his key weapon for the second was the right cross. Haney repeatedly landed his back hand, until Kambosos was drenched in blood by the end of the fight.

“I went in there I knew he was looking for the jab but I wanted to show some other tools in the arsenal,” Haney said in the postfight interview. “My dad wanted me to throw the hook more but I felt like the right hand is what won me the fight tonight.”

The right hand opened up for Haney because Kambosos made a key miscalculation in his strategy: by trying to switch stances so frequently — born, no doubt, out of a misguided understanding of what it means to be “slick” — Haney had plenty of openings to fling his sharp cross.

“When he first came out, I didn’t expect him to be switching,” Haney said. But I caught on to his timing and his angles, and I started to pick my shots more.

“Against a southpaw, the right hand is always on the money. That’s what happened.”

For all of the offensive novelties he brought into the ring, Kambosos seemed fresh out of answers by the time the middle rounds rolled around. In the sixth round, Haney had Kambosos bleeding from his left eye. And, in the seventh, Haney was the one who was beginning to do the stalking.

After a lull, the fight took an interesting turn late in the fight. In a rare sequence, the ninth round saw both fighters trade punches in the middle of the ring. Haney had the final word, however, connecting with a combination late that appeared to hurt Kambosos. In the next round, sensing the Aussie was hurt, Haney began swinging for the fences and appeared on the verge of even getting a stoppage.

Asked if he wants to fight next the likes of Vasiliy Lomachenko and Gervonta Davis next, Haney refused to name specific fighters. It has been reported, however, that Top Rank Inc., the promotional company that backs both Lomachenko and Haney, is looking to stage a fight between their two clients sometime next year.

On the Top Rank/DBE-promoted undercard, Aussie bantamweight contender Jason Moloney fended off a game Nawaphon Kaikanha of Thailand over 12 rounds.

Yet, Moloney, a former title challenger, ran into a few rough patches against an opponent who was never once truly wobbled. In the 10th round, Kaikanha connected with a right hand that momentarily destabilized Moloney.

Junior bantamweight contender Andrew Moloney, the brother of Jason, inched closer to yet another possible title shot with a comprehensive points win over Norbelto Jimenez of the Dominican Republic in a 10-round junior bantamweight bout.

Moloney scored two knockdowns, one apiece in the first two rounds. Jimenez, who complained to the referee all night long, was also deducted a point for hitting after referee Ignatius Missailidis issued a stop to the action.

Cherneka Johnson overcame a gruesome cut above her forehead early in her 10-round defense of her junior featherweight title against former champion Susie Ramadan to win a unanimous decision.

By the second round, both fighters were bleeding from the face but it was Johnson who fared the worse after an inadvertent head clash created a giant gash above her left eye. A ring doctor appeared close to stopping the fight but allowed it to continue.