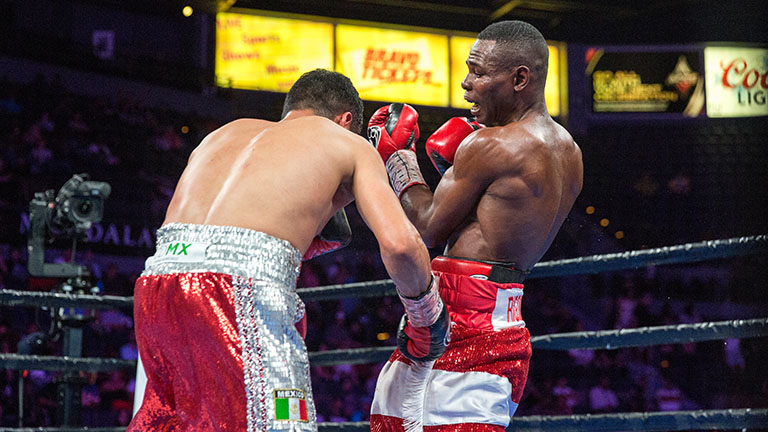 CUBA’S Guillermo Rigondeaux was in action at the Mandalay Bay in Las Vegas on Sunday (June 23). He took a stoppage victory, halting Julio Ceja at 2-59 in the eighth round.

“People were saying that I get on the bicycle and run a lot,” Rigondeaux said. “Well that’s not true so I wanted to show them I could fight in short distance and I wanted to get a couple of rounds in. Then that left hand came and ended the fight.

“I knew I was going to catch him with the left, but it wasn’t there in the beginning. I knew in the later rounds that I could use it and actually catch him. We practised that every day and it paid off.”

This was an eliminator for the WBC super-bantamweight title so Rigondeaux will be eying a challenge against the winner of the Rey Vargas-Tomoki Kameda title fight.

Former world champion Jermell Charlo knocked Jorge Cota cold at 2-17 in the third round of their clash on the same bill.

Cota rose from a hard knockdown, only for referee Jay Nady to let him carry on needlessly. Charlo stepped straight in with a savage one-two, the combination landing immediately to knock out the Mexican.

Tony Harrison, the new WBC super-welterweight champion who dethroned Charlo last December, was watching from ringside. An injured ankle had ruled him out of a rematch with Charlo.

“I’d like to thank you Cota. He stepped in the ring. The guy who proclaims he has the title didn’t show up,” Charlo said. “I got that knock out right in front of my family. He was just getting started and I landed the clean shot.

“I’m trying to be great. I plan on getting the rematch next and then getting all of the belts by the end of the year. Tony Harrison is in the building, He’s lucky he didn’t accept this fight with me. I’m a much better fighter.”