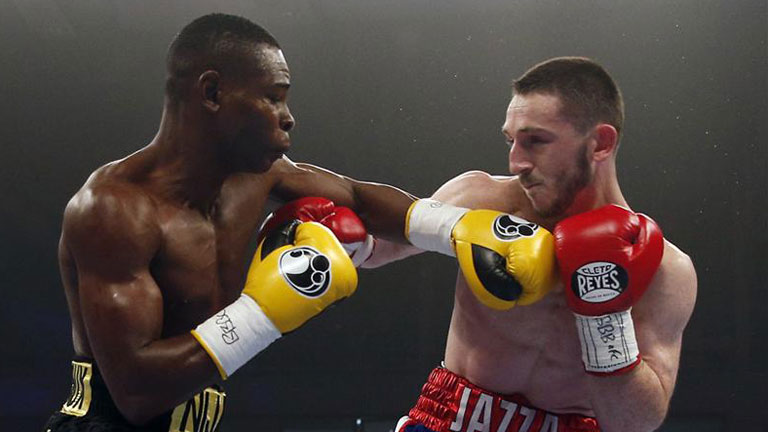 The Cuban struck smoothly from range. Though the combative Dickens was unintimidated in the first round, in the second stanza Rigondeaux’s southpaw left hit home and hit hard. He launched the back hand lead with dazzling speed. It looked as though Dickens had taken the power and taken it well, coming back at the Cuban with hooks of his own. But at the end of the second round when Jazza returned to his corner, the damage he’d suffered became clear. The shot had broken Dickens’ jaw, the gruesome swelling cruelly visible and his corner ended the fight there and then. Rigondeaux picks up his 17th win, his 11th by stoppage.

There was a genuine thrill to see Rigondeaux at the Ice Arena Wales with fans clustering round to take pictures of the great man. But the atmosphere took a bloodthirsty turn when home favourite Liam Williams took on Gary Corcoran in a bitterly contested British super-welterweight title fight. There was trouble in the crowd, that took some time to subdue, as the two battled ferociously in the ring. Corcoran lanced rights through, hacked hooks at Williams but Liam used his jab and heavier right hand to gradually assert control from the centre of the ring. Gary always pressed him hard but Williams made a breakthrough in the 11th round, dropping Corcoran and hammering on the ropes until another sickening right forced the referee to stop it at 2-10.

Terry Flanagan defended his WBO lightweight title from Mzonke Fana but it proved a more perplexing night than expected. The diminutive, far older Fana ducked under shots and was more elusive than a 42 year old should have been. Flanagan was rushed and soon frustrated himself, failing to hurt Mzonke until late on in the fight. But Fana made it to the final bell, losing 120-106. Flanagan may have dropped him twice but on this occasion he didn’t impress.

Bradley Skeete put in an assured performance. Technically superior to Alexandre Lepelly. He hammered him to defeat inside seven rounds.

Timo Laine absorbed punishment as Tommy Langford sent hooks and straight right hands flying through his defences, until the referee finally spared him further suffering in the seventh round. Langford defended the WBO Inter-Continental title.