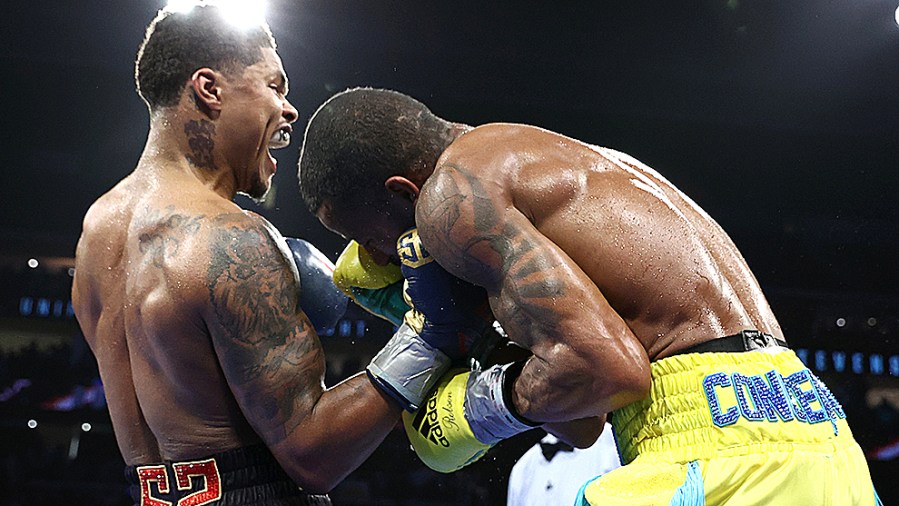 Stevenson loses belts on the scales before dishing out a beating to Conceicao, writes Nigel Collins

A RECORD crowd of 10,107 at Newark’s Prudential Centre was on hand to welcome home native son Shakur Stevenson who hadn’t fought there since July 2019. The former U.S. Olympian was scheduled to defend the WBO and WBC super-featherweight titles against Brazil’s Robson Conceicao, but failed to make weight and was stripped of the belts at the scales.

The fact that their homie had just surrendered two titles without throwing a punch certainly didn’t dampen the audience’s enthusiasm. They just wanted to see the local hero kick some ass, which he did after forfeiting a negotiated portion of his purse to Conceicao. Stevenson’s 12-round unanimous decision wasn’t spectacular but it showcased his skills and ability to dominate.

Conceicao was the lightweight gold medalist at the 2016 Rio de Janeiro Olympics, the same year the left-handed Stevenson won bantamweight silver. Robson’s only prior loss as a pro was to Oscar Valdez, a recent Shakur victim.

Fighting under ring lights that looked like a giant spider, both boxers took turns advancing carefully behind pawing jabs in the opening round. They were still relatively cautious in the second, until Stevenson scored with a right to the head and a left to the body, forcing Conceicao to back off.

Stevenson, 25, landed a hard body shot in the third that forced the 33-year-old Conceicao to grab and hold. Later in the round he jarred Robson with an uppercut. Conceicao fought back but his punches were nowhere near as sharp as his adversary’s. When Stevenson connected it sounded like crack of a bullwhip, while Conceicao’s offerings were more slap than flak.

One can see why Conceicao did so well as an amateur where touching an opponents is often scored the same as stiff punch. That style seems to have followed him into the pros ranks, and on top of that he was up against a boxer considered one of the slickest defensive specialists in the business.

More body blows and combinations to the head had Conceicao in trouble in the fourth. It was Stevenson’s most sustained attack of the fight and just before the bell Robson collapsed, a delayed reaction to a malicious left to body. He beat referee David Fields’ count and walked to his corner, still standing despite taking a prolonged pummeling.

Conceicao was still in survival mode early in the fifth. He’d endured the worst and then had a few moment of success as they exchanged, but he just couldn’t punch hard enough to turn things his way. Nonetheless, the Brazilian tried to rally again in the sixth but faded when Stevenson tagged him with two left hooks.

The defiant Conceicao had yet another go in the eighth and managed to land a couple of rights and twice stuck his head in his tormentor’s chest and bulled him into the ropes. Stevenson, perhaps miffed by the rough stuff, hip rolled his antagonist to the canvas, a transgression that prompted referee Fields to deduct a point.

By the 10th Conceicao was throwing just enough punches to survive. Perhaps frustrated he couldn’t finish the job Stevenson flipped him to the floor again but received a warning rather than another penalty.

Conceicao legs wobbled in the 11th when Stevenson strafed him with a pair of lefts to the head and near the end of the round found a home for his right hand.

Due to his courage and robust chin, Conceicao was still trying to get something going in the last round. He must have known it was a lost cause but pride kept him going.

The verdict was never in doubt. Judges Lynne Carter and Steve Weisfeld scored the bout 117-109, while John Signorile had it 118-108 all in Stevenson’s favor. The one-sided match was far from a thriller but oddly enough it was Conceicao’s game effort that made it tolerable.

No opponent has come close to beating Stevenson in 19 pro bouts. It remains to be seen what happens now he’s moved up to the lightweight division, where an array of compelling talent such as Devin Haney, Vasiliy Lomachenko, Gervonta Davis, George Kambosos Jnr and Teofimo Lopez Jnr await—and they all punch considerably harder than Conceicao.

The bright-eyed Stevenson is brimming with confidence, eager to take on the best fighters in one of boxing’s toughest divisions.

“We gotta fight the champ. Me and Devin [Haney] could lock in,” Stevenson said. “After he fights Kambosos [in a rematch on October 16], let’s get it on. I’ll fight Lomachenko, too!”

Stevenson has already beaten a number of very good fighters in lower weight classes. Will five pounds make any difference?

In the chief preliminary precocious lightweight prospect Keyshawn “The Businessman” Davis, Norfolk, Virginia, had no problems stopping Omar Tienda, Guadalupe, Mexico, at the 1-38 mark of the fifth round of a scheduled eight rounder. Davis knocked down Tienda with a right that landed just above the ear. The Mexican regained his feet but referee Earl Brown rescued him soon afterward.

It was only Davis’s sixth pro fight and he handily defeated a 30-fight veteran who had won seven of his most recent bouts, albeit against modest opposition. Davis didn’t really open up until the fifth round when he erupted with a fusillade of quick, accurate punches that dispatched Tienda posthaste.

The Top Rank promotion was televised by ESPN.

THE VERDICT: Stevenson now has to prove he’s as good at lightweight as he was in the division below.