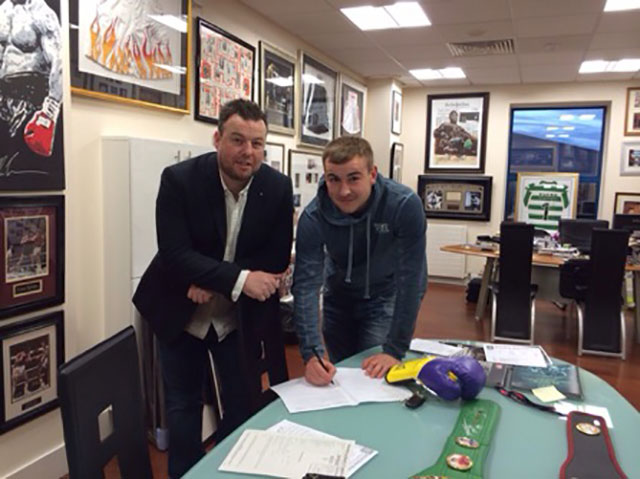 THE famous St Andrews Sporting Club made their first official signing last week when highly touted amateur Grant Quigley from Port Glasgow joined the successful team run by new owners Iain Wilson and Colin Bellshaw. Quigley is following a family of boxers, as two of his brothers have been involved in the sport, but it’s the 20-year-old that has caught people’s attention with his exciting style and never say die attitude.

Quigley will be making his debut on the biggest night of the St Andrews calendar, The Burns Night show on January 26, 2015. Read below his thoughts on his amateur career and what he hopes to achieve as a professional fighter.

Hi Grant, You are the first signing for Iain Wilson and Colin Bellshaw under the St Andrews Sporting Club banner (pictured above). How does it feel to join such a successful promotional team?

It’s great to be on board with St Andrews and to be their first signing, I hope to do them proud as I’ve known Colin for a numbers of years so it’s also good to be with someone you know.

You had a very successful amateur career winning a silver at the Commonwealth Youth Games in 2011, what can you remember about the competition?

The Commonwealth Youth Games in the Isle Of Man was a great experience. I beat the New Zealand and Indian champion and lost by one point to an Australian in the final. I got a silver in 75 kg (middleweight) category

At the 2014 Commonwealth Trials for entry to the Scottish Team you lost a decision against Scott Forrest, many people thought it was close. Did you think you did enough to win?

The fight with Scott Forrest was close but I felt I edged the fight landing the better shots and being the one in the driver’s seat controlling the pace. I also think I would have been a better selection for the games in Glasgow.

What other Titles did you win as an amateur and what was your final amateur record?

I won the British at youth level twice and the Scottish 4 times between junior and youth. I also won a gold medal at the golden gloves tournament in Vojvodina Serbia. My final amateur record was 56-13 18 KO’S.

What do hope to achieve as a pro fighter and what weight will you be fighting at ?

I would like to win big titles like the British, European and even world title eventually. I will also be fighting at super-middle (168lbs).

Boxing insiders up here in Scotland have described you as an exciting aggressive fighter, have you modeled yourself on any fighter from the past?

I would agree. I’m an exciting aggressive fighter, that’s the way I like to fight as I stopped a lot of opponents in my amateur career. I modelled myself on Roberto Duran and other amateur fighters at the time like Darren Sutherland.

Who will be training you as a pro?

Kenny Crighton my club coach will be training me. He’s trained me since I was nine and I think he’s done a good job. Also Rodney Campbell who helped me through my amateur career.

It looks like you will be making your debut early next year, What can the fight fans expect to see and do you have a message for the general UK boxing scene?

I will be making my debut on January 26 on the Burns Night Show and i cant wait. I think people will enjoy the power and aggression I put on display and will hopefully begin to follow my career as it progresses.