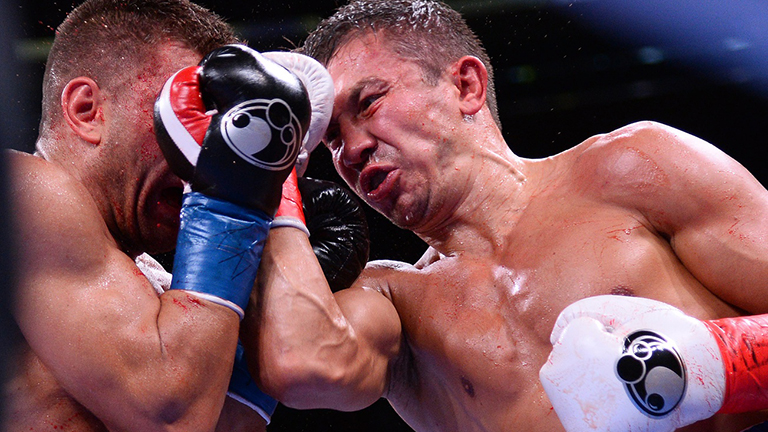 THOUGH Gennady Golovkin would have expected a tough battle from Ukraine’s Sergiy Derevyanchenko tonight (October 5) at Madison Square Garden, New York, he ended up receiving far more than he bargained for during the 12 rounds they shared.

In one of the better fights of the year, Golovkin and Derevyanchenko went back and forth with the vacant IBF middleweight title on the line and it was Golovkin who narrowly prevailed by scores of 114-113 and 115-112 (twice).

For once the scorecards told the story of the fight. They correctly reflected the close nature of a bout which began in dramatic fashion with Derevyanchenko dumped on the canvas by a Golovkin right hand in the very first round, then badly cut not long after.

Derevyanchenko had been knocked down in the first round of a previous world title challenge against Danny Jacobs, so was no stranger to that position. The experience showed, too, for no sooner was he upright again than he was launching a strong and determined attack against Golovkin through a mask of blood.

His success came from body shots he started throwing, especially the hook, which appeared to unsettle Golovkin for much of the fight and certainly hurt him in the fifth round. Time and time again Derevyanchenko would target Golovkin’s midsection, aware it was having an effect, and in brief moments it seemed the former champion was there for the taking.

But these moments were only brief as Golovkin remained measured and composed for the most part and had plenty of success of his own. There were body shots and there were sharp and accurate hooks and uppercuts sliced through Derevyanchenko’s high-held guard. He paced himself well, despite tiring early, and finished the fight in the ascendancy, ensuring he responded whenever Derevyanchenko encroached his space and tried to rush him.

In many ways, Golovkin’s rich history of combat was both a help and a hindrance tonight. Some will say he looked every one of his 37 years, while it’s just as easy to say all that experience allowed him to cleverly stay one step ahead of a very game and dangerous future champion.

“Right now, it’s bad day for me and it’s a huge day for Sergiy, his team. This is huge experience for me. Right now, I know what I need. I lost a little bit of focus. Sergiy was ready. I really respect him. He showed me such a big heart. I told him, ‘Sergiy, this is best fight for me. It’s a huge experience.’

“I just respect his team.”

Interestingly, when the time came to take to the mic after the fight, it was Derevyanchenko who received the warmer reception from the MSG crowd. Golovkin had to contend with boos, yet Derevyanchenko was treated like a heroic underdog who perhaps should have come away with the title.

This was unfair, though. For as well as Derevyanchenko fought, a lot of the excitement surrounding his performance stemmed more from the shock of seeing Golovkin pushed so hard than because Derevyanchenko was winning the fight at any time.

“I feel great,” said the Ukrainian, now 13-2 (10). “Thank you so much to all my fans, everybody who came to MSG. Thank you to my team. I want to thank everybody. It was a great night of boxing.

“The cut really changed the fight. I couldn’t see at times. And he was targeting the eye. But no excuses, it is what it is, I was trying my best.”

“When I started moving, I felt like I was giving him room and I was getting hit with those shots that he threw and that’s why I started taking the fight to him and getting closer and not giving him room to manoeuvre .

“He hit me in the back of the head. He hit me behind the ear. I didn’t really see the punch, but it didn’t really affect me that much. I got up and I wasn’t really hurt so I continued to fight, so it was nothing, nothing too bad.

“I would like the rematch if it’s possible. I’m ready.”

Golovkin has other plans, of course, and will, if tonight was a sign rather than a loss, need to get a move on.