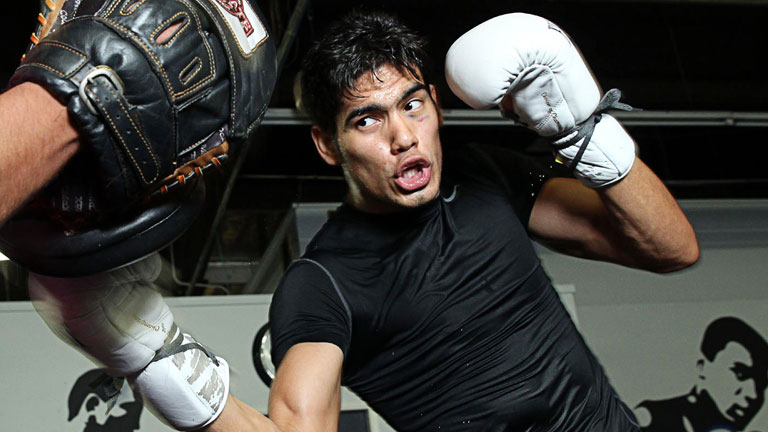 MEXICO’S Gilberto “Zurdo” Ramirez is ready to seize his big opportunity when he challenges Arthur Abraham for the Germany-based veteran’s WBO super-middleweight title on the Manny Pacquiao-Timothy Bradley III bill this Saturday (April 9). If Ramirez dethrones Abraham in Las Vegas, he will become the first Mexican to win a world championship at 168lbs.

“I’ve dreamed of winning this belt for my family,” the unbeaten challenger said at the undercard press conference. “Now is my moment, my time. I can’t wait to walk to the ring on Saturday with my country’s flag.”

Tall southpaw Ramirez, who promoter Bob Arum compared to the legendary Carlos Monzon, will enjoy a significant height advantage against Abraham, as well as ‘home’ billing over the Berlin resident. German fighters historically have not travelled well in fights on US soil, but Abraham and his team intend to buck this trend.

“King” Arthur’s trainer, Ulli Wegner, commented: “A lot of people think German fighters can’t do well in Las Vegas. We want to prove that they can.” Following on from this, Abraham himself highlighted his delight at being able to perform on a major show in the States.

Speaking through a translator, the two-weight world titlist announced, “I’m very happy to be boxing in America. I’ve given a lot in training to make sure I’ll win. I will be victorious.”

Kalle Sauerland, who promotes Abraham, has complete confidence in his fighter, which is why he chose to agree to Las Vegas as the venue for the contest, rather than pushing for Germany to stage the clash.

“This fight is in America, but it’s a huge event in Germany,” Sauerland said. “Arthur is a multi-millonaire, three-time world champion now, but I remember when he first came to us as a sparring partner with only €50 in his pocket. He’s bounced back from setbacks in the past, as all the great fighters have, and it’s fantastic to see how far he’s come.”