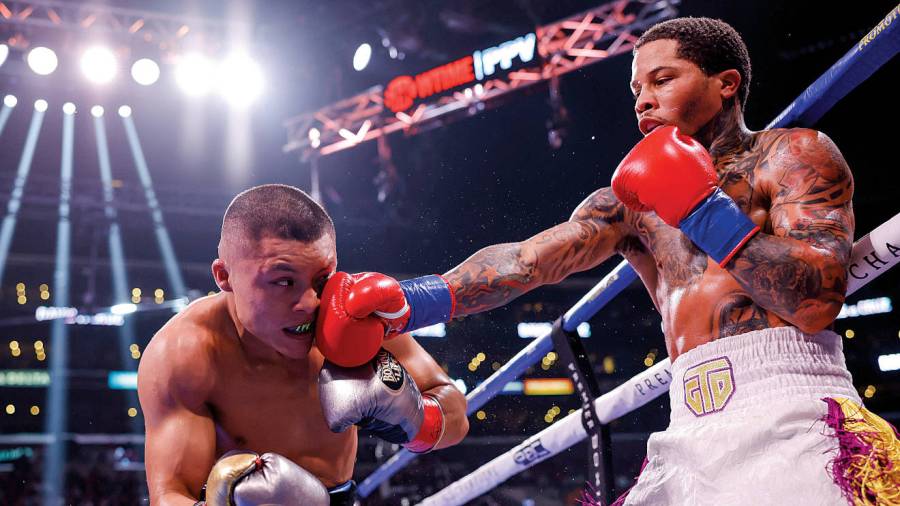 The talented Gervonta Davis and Devin Haney defeat sturdy opposition in separate lightweight bouts but both still have work to do, writes Sean Nam

THEY say there are no moral victories in boxing – but trying telling that to Isaac Cruz.

The previously unheralded Mexican contender saw his stock explode after taking the dynamic Gervonta Davis the distance in their spirited 12-round pay-per-view lightweight main event on Sunday night (December 5) at the Staples Center in Los Angeles. It was the first time in nearly seven years that Davis heard the final bell as a professional. The knockout artist has torn through his opposition, producing one lurid knockout after another. But the story turned out quite differently against Cruz, whose relentless pressure and sturdy defence made the Baltimore dynamo uncomfortable at times, a fact that was reflected accurately in the scorecards.

Post-fight, Davis suggested that he had hurt his left hand sometime in the middle rounds, thus tempering his usually electrified offence. But even he was able to recognise Cruz’s exceptional effort. “He’s a warrior,” Davis, 27, said of Cruz. “Even though he didn’t win, a star was born tonight.”

That may be hyperbole, but make no mistake, Cruz – only 23 – has clearly made a name for himself in the competitive environs of the lightweight division.

Living up to his nickname, “Pitbull,” Cruz got Davis’s attention practically from the opening bell. Using a tight guard as he stalked Davis, Cruz wasted no time flinging hooks and haymaker right hands. A left hook in the second round momentarily buckled the knees of Davis, as the crowd of 15,850 roared and gasped in equal measure.

But Davis would adjust. Using his legs and superior speed, Davis elected to counter and move. By the sixth round, he was finding a home for his left hand.

There were moments in which it seemed that Davis was one hair-trigger uppercut away from ending the bout. One stretch was during seventh round, when Davis unloaded a right hand to the body that momentarily stunned Cruz. Davis followed up with a pair of strafing right hooks, but Cruz refused to bow down.

In a minor upset, middleweight Dominican contender Carlos Adames scored the most meaningful win of his career with a majority decision over hardened veteran Sergiy Derevyanchenko in a competitive 10-round barnburner. Judge Jerry Cantu scored the bout a draw (95-95), but Tiffany Clinton (97-93) and Damian Walton (96-93) both had it for Adames. The counter-punching Adames had the upper hand in the early going. In the second round, he connected on a right uppercut that briefly staggered the otherwise sturdy Derevyanchenko. But the aggressive Ukrainian contender would roar back to finish the round on a strong note.

Both fighters turned it up in the second half, as they exchanged one furious salvo after another.

Over at the MGM Grand Garden Arena on Saturday (December 4) in Las Vegas, lightweight beltholder Devin Haney fended off a game Joseph Diaz over 12 rounds to notch a hard-earned, if somewhat wide, unanimous decision: Judge Tim Cheatham had it 116-112, while Dave Moretti and Max DeLuca both turned in scores of 117-111, all for the 23-year-old Haney.

Working primarily behind a sharp jab and ramrod straight right to the body, Haney, once again, demonstrated his superlative skillset inside the ring. Yet this was anything but a cakewalk. As in his previous bout against shopworn Jorge Linares, who managed to wobble the youngster, Haney had more than a few vulnerable moments against Diaz.

A former belt-holder at 130 pounds, Diaz, of Downey, California, offered Haney the stiffest opposition of his career. The southpaw Diaz needed a few rounds to find his groove, but by the third he was able to work his way inside and consistently land his left.

Case in point, in the seventh round, Diaz landed perhaps the best punch of the fight, an overhand left that landed flush on Haney, although Haney took it well. Indeed, despite absorbing more than a few flush shots, Haney stayed largely composed, as he went on to command the majority of the second half of the fight.

Post-fight, Haney confirmed he would be willing to travel to Australia to face newly crowned lightweight world champion, George Kambosos.

“I want to make it happen,” Haney said. “It should be a very easy fight to make happen,” Haney added. “I’ve never been [to Australia] but I look forward to picking up some belts over there.”

On the undercard (Matchroom Promotions), super-featherweight contender Montana Love continues to make the most of his newly burnished profile, stopping outmatched Carlos Diaz in three rounds.

Love, who recently signed a promotional contract with Matchroom upon his thorough beatdown down of former 140-pound beltholder Ivan Baranchyk a few months ago, repeatedly tagged Diaz from the opening bell. In the second round, Love dropped Diaz, from Guadalajara, Mexico, three times. In the third, Love had Diaz trapped in the corner, compelling referee Raul Caiz Jnr to put a halt to the bout at 0-22.

Women’s welterweight champion Jessica McCaskill successfully defended her titles for a second time with a seventh-round stoppage of late replacement Kandi Wyatt. McCaskill, a native of Chicago, was never troubled, although she had spent most of her training camp preparing for a different opponent in former titleholder Victoria Bustos from Argentina. Bustos, however, had to pull out of the fight after she was unable to secure a visa in time to travel to the United States. Upon seeing Wyatt defenseless against a salvo by McCaskill, referee Caiz halted the bout at 0-19 in the seventh round.