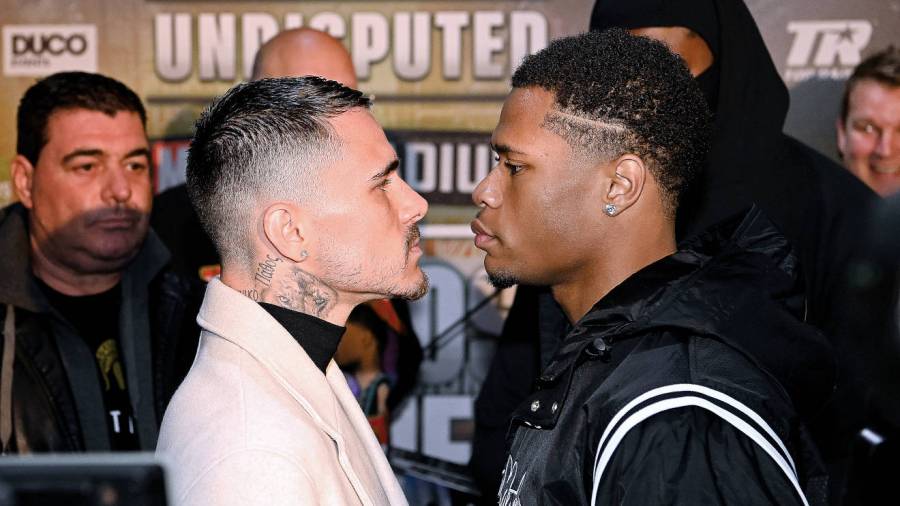 TALENT-WISE, the top of the lightweight division is as good as any in the sport, but then it feels like we’ve been saying that for a while. This weekend, in a terrific matchup between George Kambosos Jnr and Devin Haney at the Marvel Stadium in Melbourne, we get to see two of the top five actually fight each other for the first time since Vasiliy Lomachenko was upset by Teofimo Lopez in October 2020.

World champion Kambosos gate-crashed the 135lbs leaders last November when he outpointed and dethroned a gung-ho Lopez in one of the shocks and fights of the year. There was talk that the affable Aussie would make his first defence against Lomachenko until the Ukrainian went home to defend his country in the conflict with Russia. Haney stepping in is almost as good as it gets.

Haney, ranked No. 4, is 27-0 (15) and held in very high regard. Only 23 years old, the San Francisco-born Las Vegas resident heads to the champion’s home nation with the wind in his sails. But, alas, without key members from his crew. Devin’s father, Bill Haney, spent time in prison in the early Nineties for a federal drugs conviction and was thus denied a visa to enter Australia. Ben Davison, Haney’s co-trainer, won’t be in Australia either but it’s believed that he has drawn up the battle plans designed to bring down Kambosos. Which leaves long-time Team Haney member Yoel Judah – the father and former trainer of Zab Judah – to step up as chief cornerman this o Sunday (June 5).

Regardless of his problems, the American is the 4/6 favourite (Kambosos is priced at 5/4). It is certainly testament to his astronomic self-confidence that he has agreed to head to Australia despite the issues with his team. Not having home advantage is nothing new to Haney, after all. Ten of his first 15 bouts took place in hostile venues in Mexico. Though revered when he turned professional, Haney opted to retain control of his career as opposed to putting his faith in a promoter. The trips to Mexico, often staged in claustrophobic halls and bars, galvanised young Haney and got him used to being the ‘away’ fighter.

Haney started boxing at the age of seven shortly after moving to Sin City with his father. “The Dream” is known for his braggadocious persona but he’s thus far backed it all up in the ring – to a point. He can glide in and out of range and make his opponents miss before punishing them with swift counters. His jab is always deployed with spite and intelligence. Though the 5ft 8ins WBC belt-holder is one-and-a-half inches shorter than Kambosos he actually has the longer reach (71ins to 68). When it comes to pure boxing ability, Haney – who sparred his former idol Floyd Mayweather in 2017 – appears superior.

But then we thought exactly the same about Lopez before Kambosos’ extraordinary showing last year. It was a wildly impressive performance of guts, skill and determination, one that Kambosos predicted but few believed he was capable of. After taking a shellacking for much of the opening round, the Aussie – an old sparring partner of Manny Pacquiao – took two steps back before slinging a fierce overarm right hand that decked the heavy favourite. More impressive was the manner in which he recovered from one. In the 10th round he was looked bedraggled after hitting the canvas. He gamely heard the bell but many presumed he was on the brink of defeat. Yet he raced from his stool to answer the 11th in a show of defiance. He closed the bout strongly to deservedly take the split decision.

Kambosos, who owns the IBF, WBA and WBO straps, has long insisted he has the beating of Haney. Even before he fought Lopez, George remarked that out of the leading lightweights, Devin would be the most straightforward to defeat. It’s fair to say his win over Lopez is the best result either of them has produced though Haney’s overall CV is thicker. He has steadily upped his level of opposition in recent years; from 2020 he has outpointed Yuriorkis Gamboa, Jorge Linares and, most recently, Joseph “Jo Jo” Diaz. Against the talented but fading Linares, Haney had to endure some sticky moments that prove he’s far from invincible. Diaz had some success, too.

If Haney is as good as he says he is this is a bout that he simply must win. He can draw mistakes from Kambosos but the Aussie’s underrated footwork, coupled with his looping blows, makes him very hard to conquer. However, though Kambosos was a revelation against Lopez he’s also the kind of fighter that talents like Haney should be able to overcome on their way to the very top. It’s not a stretch to envision Kambosos bullying his way to another memorable triumph but the feeling here is that Haney – unlike Lopez – will box smartly and patiently to post a decision victory.

On the undercard, heavyweight Junior Fa returns for the first time since losing to Joseph Parker 15 months ago. His opponent is the 43-year-old Australian, Lucas Browne, 30-3 (26).

New Zealander Fa is limited but Browne has been on a downward trajectory since losing to Dillian Whyte in 2018. The pick is for Fa, 19-1 (10), to become the fourth fighter to halt Brown.

In a decent bantamweight clash another Australian, Jason Moloney, should be too good for fringe contender Aston Palicte of the Philippines.

The Verdict Hard to call and yet another to quality matchup.