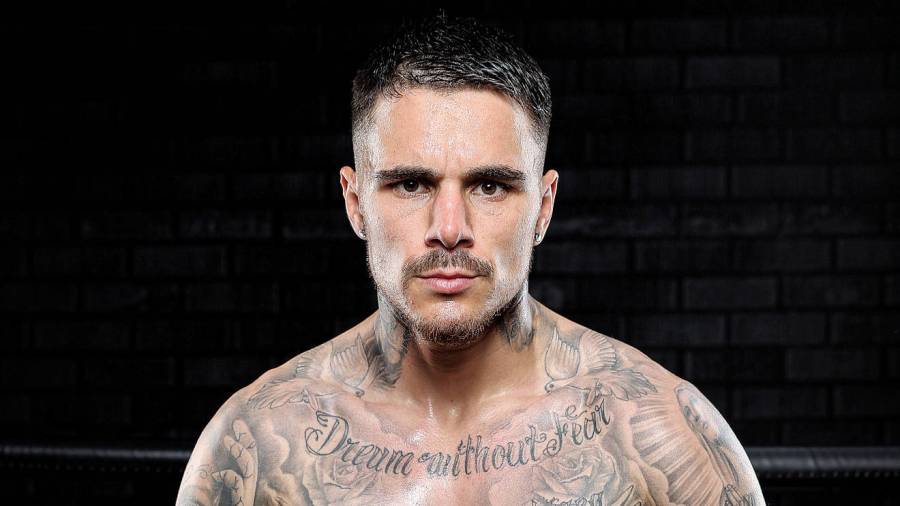 George Kambosos Jnr is now the world lightweight champion but he’s not changed a bit, which might be bad news for Devin Haney, writes Phil Rogers

AN INTENSITY radiates from George Kambosos Jnr. It never seems to wane. Day or night, he can be found toiling away in his own purpose-built gym in Sydney, Australia, the light ricocheting off freshly painted jet black brickwork. These walls act as a constant reminder to Kambosos of the journey he’s taken to becoming the world’s number one lightweight, back to when he was training before sunrise for paltry purses and lifeless fanfare. Back before he’d stood under the lights of Madison Square Garden and heard his name read out to gasps of astonishment and disbelief.

“I still have that contender mentality,” he tells Boxing News. “I’ve still got it. Yes, I’ve got the status of being a world champion. But my mindset doesn’t feel any different. I still have that contender mentality of ‘I’m only fighting for minimal money and I’m still chasing my way to the top.’ That’s how I still feel. I don’t feel no different. The victory against Lopez? Yeah, it’s there. It’s etched in history. My name has got ‘world champion’ next to it. But I don’t change. I still stay focused. And I know what got me here, with the hard work in the trenches after dark. And that’s why I painted my whole gym black.”

Kambosos is a fighter acutely aware of the importance of his own mental preparation. Some might think this relates to ‘mind games’ with an opponent, and though the manner in which he unsettled Teofimo Lopez could be described in such terms it’s the groundwork he puts in within himself that feels most crucial. The Australian is a passionate exponent of the power of visualisation, conditioning his brain so that victory is crystalised in his subconscious long before he’s stepped through the ropes.

“Every fight I visualise. I manifest and visualise this moment. Straight after I beat Teofimo Lopez I sat down with my team and said, “Okay, who’s next? Who do we fight? The biggest and best name.” Obviously, you become champion and a lot of guys want to milk the system and say, “Well, let’s take an easy fight. Let’s do a voluntary defence.” Me? I’m cut from a different cloth. I straightaway said, “Okay, there’s only two names I really want. It’s Devin Haney because he’s got that piece that he never earned in the ring or Vasiliy Lomachenko because he deserves a shot. He’s obviously had a lot of these belts and he lost against Lopez but he deserves a shot. So I manifested and visualised this moment. This big fight in a stadium, again my hand raised, me shocking the world again. Because, again, I’m not a massive underdog like I was for the Lopez fight but I’m still an underdog. And that’s amazing. That’s how I love it. I’m the top dog in that division but I am the underdog which is the best feeling. I manifest and visualise once again every aspect of this fight. Doing everything right again and getting a great victory. Shocking the world again and really dismantling half of these supposed ‘four kings’ that they did talk about.”

The next of these ‘four kings’ is, of course, Devin Haney. Ranked at No. 4 in the world, he arrived in Australia without his training team of Ben Davison and father, Bill Haney, both of whom were unable to enter the country due to differing visa issues. Kambosos Jnr has poured scorn on the praise Haney’s received from the American press for travelling out to fight him on his own, conscious of the years he himself has spent away from his family making his name. He and his team have examined Haney closely and the Australian feels very confident that he’s found more than enough in his studies to beat his challenger convincingly.

“It’s funny that people are applauding him and parading him like this is such a big victory for him just to be here. I’ve been doing it for five years constantly,” scoffs Kambosos.

“Devin’s a good boxer but when you really break it down, when you really have a look at him in depth, there are so many holes. He’s very basic. He does things over and over again, the same things over and over again. Now he’s got away with it against a guy in [Jorge] Linares who was a lot older, who just didn’t have that that kill, that lion in him to finish him off. And he got away with it against Jo Jo Diaz. Even though both these guys hit him with big shots. Now, Jo Jo Diaz comes up to just under my shoulder and he’s a small featherweight naturally. Now, if this guy and Linares are hurting him what’s a puncher, a guy that’s so explosive and fast and got very good power and moves so well, going to do to him?”

Kambosos now goes into this fight carrying a whole new dynamic psychologically. Having spent the vast majority of his career as the man chasing the best in the division he’s conscious of the fact that he’s quickly become the one with the target on his back, every contender and blue chip prospect angling for a shot at his crown. It adds an extra layer to the pressure he faces, one he’s embracing and using as fuel for the fire he stokes in training.

“I have that hunter mentality that I’ve always had. That drives me but I also have the hunted mentality where you got to be sharp and you know that they’re on your tail trying to get what you got. So that drives you even more. That pushes you that extra, not one or two rounds, it pushes you another five to 10 rounds in training. Makes you run the extra three to four miles on top of what you’re doing. So that’s what I’ve really done. It’s preparation.”

Drafting in quality sparring from the US has been an important part of this planning, with top Puerto Rican prospect, Xander Zayas, and 22-0 contender, Albert Bell, flying over to help Kambosos with his game plan. Training with his wife and children close by in Sydney has meant he’s been able to avoid those moments of solitude from previous camps, and seeing them wander in and out of the gym has clearly been inspirational. Regardless of this, however, Kambosos knows exactly what drives him towards the objective in his mind. Quite simply, it’s the battle itself.
“I see my kids and my family and know that I’m doing everything I can to give them the best life. As a father, knowing that they’re financially well off is a really good feeling. But, for me, I love to fight. This is the passion of fighting. This is really not about belts. It’s not about money. This is about legacy and this is about the passion for it. And if me and Devin Haney were to fight for free or if he was about to walk into my gym right now, just me and him, I tell you, we’d fight. Because that’s the kind of love I have for the sport and for fighting itself,” says Kambosos.

“My full focus is on Devin Haney and I’m chasing the biggest and best. That’s what I’m about. I’m not here to protect the record. I’ve been there from day one. I don’t care about this record. I don’t care about protecting the zero. I’m here for the best fights and if I believe in myself and I know what I bring to the table then that zero should always be there because I know how well I prepare and I know how well I fight inside them ropes.”

And so to June 4 and his huge homecoming at the Marvel Arena in Melbourne, an event the champion has declared to be the “biggest fight in Australian history.” Talk inevitably turns to how the fight will pan out, yet such is his commitment to the path he’s plotted in his mind that Kambosos’ prediction feels less like a prophecy and more like a clairvoyant reading his own cards. Certainty accompanies the fire, as undimmed as the shadows that dance across those black walls.