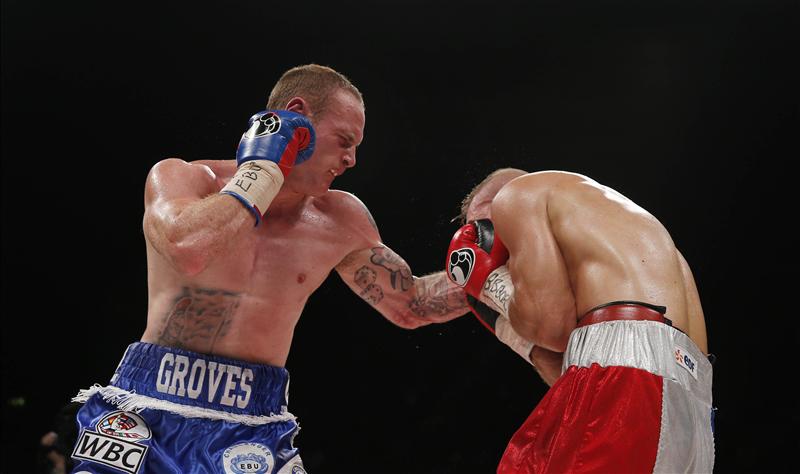 GEORGE GROVES expects to be fighting for one of the major world title belts next, after outpointing Martin Murray on Saturday at the O2 Arena in London in a thrilling contest. The bout was an eliminator for the WBA Super super-middleweight title, so he should be close to challenging for that belt, especially if the title is stripped from Felix Sturm, the champion, who has failed a drug test.

“I’d crave a big fight now, a major belt would be perfect. I’m not going to get hung up on anything. I’m going to see what materialises,” Groves said. “I’m in entertaining fights. Me and Murray took the risk and guaranteed value for money before you booked tonight, which we wasn’t sure whether we would get elsewhere… That should be recognised and because of that I think I’ll have the opportunity to have big fights. I put bums on seats.”

He finished with plenty of respect for Murray saying, “Martin’s a good fighter, I’ve probably boxed better fighters on paper but I felt I boxed really well tonight… It was a physically demanding fight, a lot of punches must have been thrown, a lot of big punches where landed, I thought the cut was from a clash of heads but the referee ruled it a punch. I would like to watch that back. You’d assume what Murray’s gameplan would be, would be to try and land body shots in the first half of the fight, try to tire me out, take over in the second half. He did land some body shots, but he shipped a few headshots himself in the early rounds that probably took a lot of energy out the tank for him.”

George concluded, “A world title by the end of the year would be ideal. We’ll see what comes about. Whoever I fight, it’s usually a big fight. I’m viable for most opponents.”