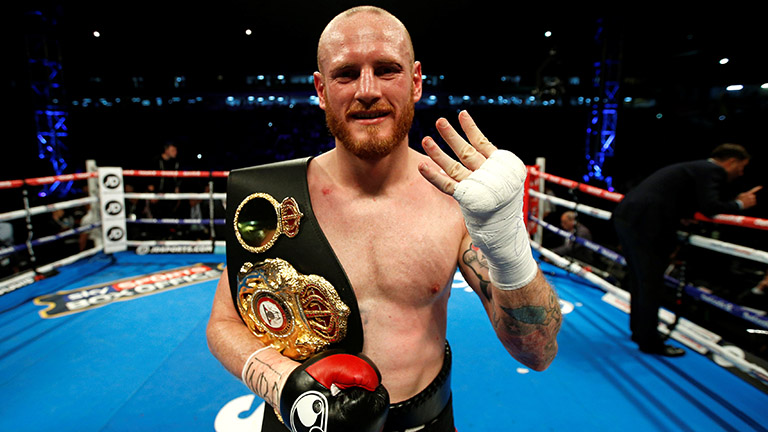 He could have rematched James DeGale at Wembley Stadium. Instead he walked away from the sport. George Groves explains why

GEORGE GROVES is a satisfied man. He doesn’t need to fight again, at just 30 years old he has retired from competitive boxing, and he even has Andre Ward to handle his twitter spats for him.

Ward took issue with Carl Froch’s reaction to his Groves’ retirement, while George himself has been able to sit back and appreciate the plaudits that have come his way. “Andre Ward came to my defence, a lovely chap, so I followed him [on Twitter] last night. Lots of fighters said nice things, people I have shared a ring with, some who have surprised me and some I probably have not even seen,” Groves said. “It’s been lovely, it’s been really nice. I don’t know if I expected it. I try not to expect anything when it comes to these things.”

Groves had genuine rivalries with Froch and James DeGale. But holds no grudge with Callum Smith, who defeated him in September last year to seize the Londoner’s world title. Groves had been in a race against time to recover from a dislocated shoulder. It might not have been 100 percent “but I genuinely thought it would be good enough,” Groves says.

“So no excuses. Callum was the better guy on the night and he won, deservedly so. I think he also probably dealt with the occasion better than I did. The fact that the timings were messed up and it was in Jeddah,” he continued. “Full credit to Callum. It was really tough. It was the hardest prep I ever had trying to get fit for that fight.

“Boxing became harder and harder, maybe motivation and balancing my home and gym life. It ran its course and I always liked the idea of retiring at 30 and leaving when there is still something on the table.

“I thought I would win the [World Boxing Super Series] and bow out with everything and if someone offers me DeGale at Wembley to avenge my Wembley defeat [to Froch] then that might have been fun. But that was a pipedream. Win lose or draw, I thought Jeddah was the end.

“I feel ready for a new challenge, something to get stuck in to.”

“I have earned millions in one night but it is not one night’s work, it is a lot of hard work and sacrifice, especially now with my two little boys. I never wanted to be a fighter who had a fight for the sake of it, or the money,” he added. “No doubt as time kicks on I’ll start to miss that element of competition. That battle. The sparring just because you want to be better than someone else.

“I suppose I still do see myself as a fighter to a certain degree. That might take a while to change or it might never change. As long as keep the attributes of a fighter that work well in future that’s all good.”