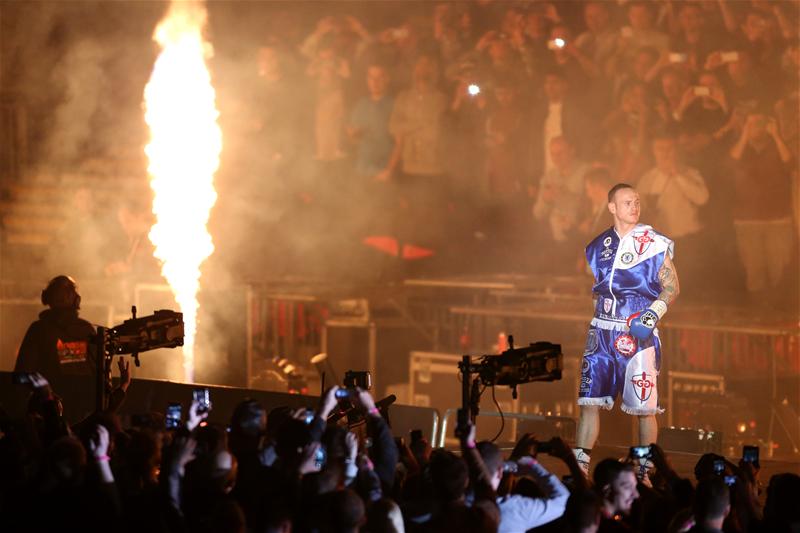 GEORGE GROVES is tipped to fight Fedor Chudinov for the WBA world super-middleweight title before a potential rematch with IBF champion James DeGale.

Groves outpointed DeGale in 2011 in a close encounter though their ongoing feud beckons for a return.

After drawing with Badou Jack earlier this month, DeGale challenged Groves to a fight this year, but George has been granted a world title crack by the WBA and his trainer, Shane McGuigan, prefers that route first.

“Stuff’s coming in from James DeGale – I’m out of George’s negotiations obviously, but I know what’s coming in and what’s coming out in terms of messages. I would like him to fight Chudinov, get the world title and then we’ll see,” he told Boxing News.

“James DeGale can run his mouth, he hasn’t got a fight now. There won’t be a Jack rematch, Callum Smith won’t fight him because he wants to do the same as us, win a world title, so he’s sat twiddling his thumbs for half a year.”

Groves lost to then WBC super-middleweight champion Jack in 2015, prompting speculation over his future in the sport. He subsequently split with trainer Paddy Fitzpatrick and joined forces with McGuigan.

The young coach, who also trains Carl Frampton and David Haye, remains confident Groves will win a world title at the fourth try.

“Everyone wrote George off when he fought Badou Jack. Got dropped early, everyone said ‘he’s chinny, he’s finished,'” he said.

“But he got up, he battled through it, he got hurt once or twice and people were saying Jack’s not a puncher, people saying he’s the weakest champion. I thought he beat DeGale. When I first watched it I gave it a draw, but when I went back there was one round I scored differently and that swung it for me.

“It’s a shame we didn’t link up earlier, this year we’ve got some massive fights available but there’s no point just jumping the hurdle into the big fights. We’ve set out to win a world title and that’s what we’ll do.”

Chudinov was beaten by Felix Sturm last February, though Sturm subsequently failed a drug test. He vacated the WBA title in October citing an elbow injury, and the WBA ordered Chudinov to box Groves for the vacant strap late last year.

Both sides are still working on securing a date and venue, but Groves and his team were aware of this chance arising and so prepared accordingly.

“We’ve faced a couple of guys similar to Chudinov in the build-up because we knew he’d either be reinstated as champion or be made mandatory for the vacant title. We planned this route, now we’re in position.”