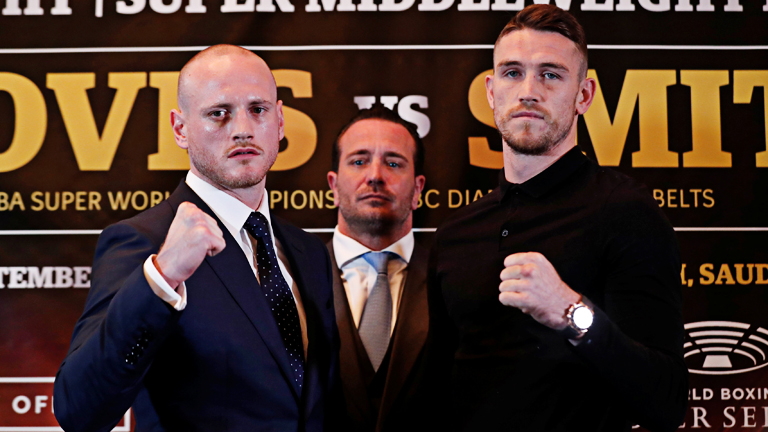 AHEAD of their World Boxing Super Series final, George Groves and Callum Smith held their first head-to-head press conference at in London Friday.

Their WBA super-middleweight championship fight will take place on September 28 at the King Abdullah Sports City, a 10,000 seat indoor arena in Jeddah, Saudi Arabia, an unusual location for an all-British world title clash.

“I’m finally sitting here for my world title fight, which I’ve been waiting for for a long time,” Liverpool’s Smith said. “I’ve finally got a chance to prove I can go out and become a world champion.

“A world title fight that’s when big fighters raise their game,” he continued. “I’m expecting the toughest fight of my career and I’m training for that.”

But he warned, “I’m a better fighter than anyone he’s faced previously especially in this tournament.”

And he adds, “I’ve always risen to the occasion.”

“In terms of the tournament, he’ll be the toughest test yet,” was all Groves would concede. But he maintains, “It’ll be another comfortable win. So far the tournament’s gone to form book… I don’t envisage anything different this time around.

“Callum’s still an unknown quantity at the top level. He’s yet to make that final step. We’ll have to find out.”