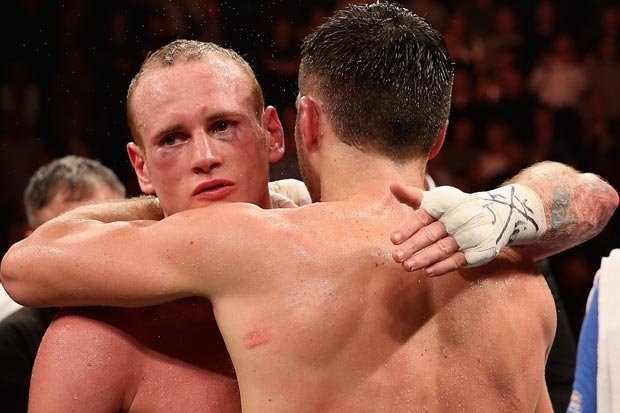 Despite setting up shot at WBC title, Groves is keen to rekindle grudge with Froch

FOLLOWING his win over Christopher Rebrasse, new European super-middleweight champion George Groves called out Carl Froch yet again. Despite being stopped twice by Froch – the second time via a brutal one-punch knockout – the Londoner believes he has the beating of the IBF champion.

“It was amazing to be back boxing and back winning,” Groves said. “After the win I looked into Froch’s eyes and he looked back into mine from ringside. I’ve got a bright future ahead of me and if Carl Froch wants to carry on boxing, I’m happy, willing, ready and able to knock Froch out. And I will.”

Froch, though, has no interest in fighting his domestic rival for a third time.

He said on Sky Sports:

“Third fight with me? You know if it was 1-1, in two close fights, then you have the decider,” he said. “If I’m going to have the decider with anyone, it’s got to be Mikkel Kessler.

“I’ve got to sit down and speak to Eddie Hearn my promoter over the next couple of weeks.Whoever I fight, it’s going to be a big fight. I mentioned (Mikkel) Kessler, there is Anthony Dirrell, James DeGale is mandatory for the IBF title, so these are all names potentially.

“We are still looking at Julio Cesar Chavez Jnr . For me, I’d still love to fight in Las Vegas, the fight capital of the world.”