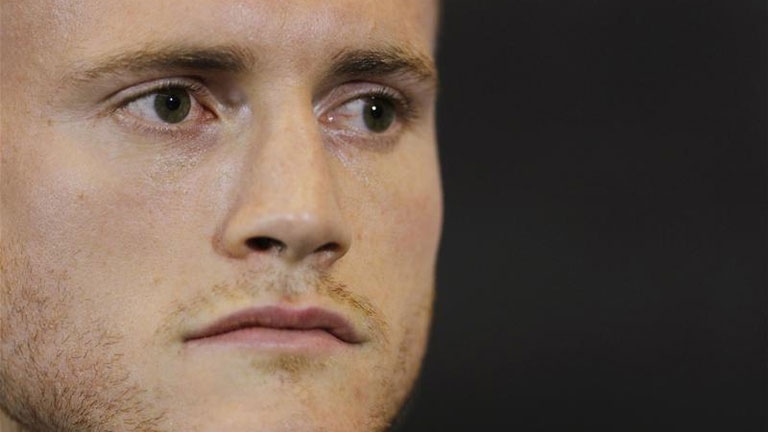 For Badou Jack, though, George Groves is 'just another fight'

GEORGE GROVES is ready to bring home the gold as he challenges for the WBC super-middleweight champion Badou Jack on the undercard of Floyd Mayweather’s (supposed) final bout against Andre Berto.

It’s been a whirlwind career for Londoner Groves, best known for his two losses to British rival Carl Froch in previous attempts at world belts. He’s since returned with a points win over Christopher Rebrasse for the European title, and trumping a wild affair with American Denis Douglin via seventh round stoppage.

“Every fight is more vital than that last, more important than the last and there’s more to lose, especially once you’ve lost,” said Groves.

“I came back after losing last year and won the European title, I became the mandatory of the WBC. Since then we’ve been rolling and waiting for our opportunity to fight for the WBC belt. We knew it would come so we’ve been patient with it.

“People will consider this a 50-50 match up [against Jack]. We’re going to go in there and show people that they couldn’t be further from the truth. We’re in a great place and we’re just ready to perform, to steal the show and arrive on the world scene.

“So all the pressures and all the excitement and everything else that goes with fighting for the world championship, I don’t feel any of it because to me, it’s just a fight,” Groves said.

Groves, still only 27, has spent the last two months training in the US at Big Bear Lake, undergoing gruelling mountain runs to whip him into shape.

Against Jack he’ll face an opponent with a record of 19 wins, with just one loss and a draw on his record, but Groves insists the Swedish-born fighter won’t be on his level.

“We have plenty of motivation up here in the mountains. We’re working hard. It’s been a lifelong dream to become world champion. We’re just concentrating on Badou Jack,” Groves said.

“This is a fight against a good guy, but a guy who is not as good as me. For that reason, we’re just looking forward to getting in there and performing. And winning and everything that goes with it.

“Without trying to give too much away about the game plan, we know Jack’s strengths. We know his weaknesses. We plan to go in there, nullify his strengths and expose the weaknesses.

“But we’re in phenomenal shape. First we came up here, I was in good shape. I was struggling to breathe because of the altitude. But now, we are flying. We’re getting better results than we do back in London when we’re out in flat land and there’s more oxygen.

“We’re going to go bring the fight to Badou Jack. Make sure he works for every second of every round. From there on in, the game plan will develop,” he said.

31-year-old Jack, a Mayweather Promotions fighter, came to prominence with his majority decision victory over Anthony Dirrell in April of this year to win the WBC title in a forgettable bout. The 168-pound champion is unfazed at Groves’ confidence going into the bout.

“For me it’s just another fight. I’m not a trash talker. I don’t get into all that trying to get into your mind and stuff,” said Jack.

“I’m staying focused on winning the fight. I might seem like a quiet guy or something like that, but come fight night, in the ring, it’s going to be a different story.

“It’s a 50-50 fight and I think that’s where you don’t know who’s going to win. That’s what makes it so exciting. I believe I’m the better fighter and I’m 110 percent confident that I’m going to win this fight,” he said.