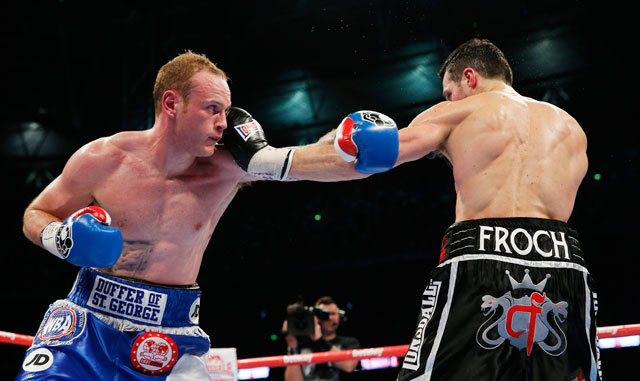 GEORGE GROVES believes he should be fighting Callum Smith in a final eliminator for the WBC super-middleweight world title, rather than European champion Hadillah Mohoumadi who boxes Smith on April 2 in Liverpool.

“Eddie [Hearn] has tried to slip Callum Smith through as a final eliminator,” Groves said. “I’ll fight Callum Smith for the number one spot. That’s a fight that makes much more sense to me or something else along those lines, if I can’t just jump straight in for a world title. That’s one of many options, but if Eddie wants to present it, we’ll have it. I like Callum Smith’s style of fighting, I’m impressed with him. It still wouldn’t be a problem.”

Groves’ promoter, Kalle Sauerland has issued a complaint to the WBC, saying. “It’s something we’ve not just spoken about, we’ve lodged a protest in writing.”

He insists, with Groves ranked number three and number two Gilberto Ramirez fighting WBO champ Arthur Abraham, “There were no grounds to call for the number seven [Mohoumadi] and skip active fighters. George wasn’t retired, the WBA once had a guy who was dead or something. They’re going over guys who are headlining shows… It’s a decent fight, a decent tune up, but it cannot be an eliminator. We have to put our faith in the WBC and we’ll see.”

If Sauerland-promoted Abraham defends his title, Groves could yet challenge him. “In an ideal world I’d like to keep my boxing family apart. At the end of the day George will rip my balls off if I don’t get him the fight and that’s his only option,”Kalle said. “It’s a huge fight whether it’s in Germany or in England but it’s one of many options.”

Boxing Groves on the undercard of Manny Pacquiao’s next fight, where Abraham-Ramirez takes place, is a possibility but Sauerland noted, “George is UK fighter, he didn’t sign with us to go travel the world.

“George is someone at the age of 27 who has managed to sell out Wembley stadium, he’s someone who could do that in the future. We have no desire to try to turn him into a US superstar over night. First the plan is to become world champion, if we have to travel to do that would be no problem for him.

“For the moment the ideal of course is to go on these UK dates.“

There are Sky dates available, possibly on the Carl Frampton-Scott Quigg February 27 undercard or on the April 9 show at the O2. Martin Murray could be an opponent for Groves but Sauerland cautioned, “It’s a very good fight. I think it’s one of many options.

“We gave Martin a big, voluntary option against Abraham. We are happy to do something with him but there has to be a story.”

Groves added, “Martin Murray is a lovely chap but it’s an easy fight for me. He’s a middleweight. He hasn’t quite done it yet. He’s a nice guy, I like the way he fights. He wouldn’t be a big challenge for me. I’d be very confident of beating him. It needs to make sense, if it was an eliminator for something but just for the sake of a fight, him fighting me is great because it’s a high profile opponent for him but I’ve got much more offers than he does. If they want to spice it up and make it worthy of something, we’ll have it straightaway. But for the sake of just a fight, we’re striving for a world title, we’re far ahead of the pecking order than he is.”