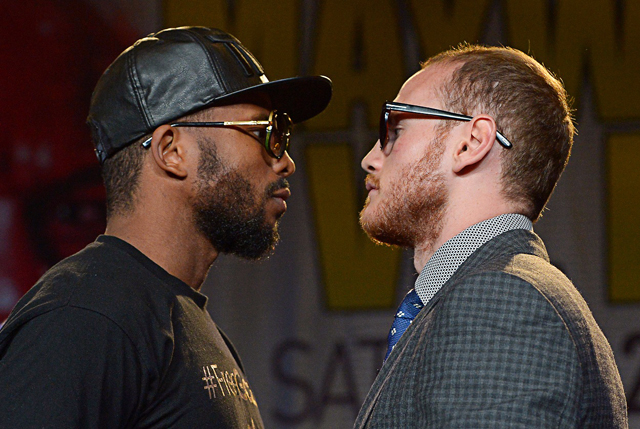 IT’S good to be in Las Vegas. I know my way round, I’m here every year. I boxed here as an amateur, I’ve boxed here as a professional and I’m always successful.

Badou Jack needs that support that he’s got out here. He’s been on stage with family members that were getting rowdy, Leonard Ellerbe is on the stage with him, trying to get him into a confident state.

I do admire him. He took himself out of Sweden and came over here to Las Vegas, and walked into what must be an intimidating gym, the Mayweather Gym. He’s made it his home but at the same time but he’s surrounded by an adopted family. He’s got all his stablemates fighting on the same card, he’s under the Mayweather Promotions banner. He talks about being the strong silent type, and confidence is being quiet but we’ve done two face offs and on each occasion he had to talk to me. I didn’t say a word. I’m not the one talking. He’s in a position where he hasn’t been before. I walked into the MGM this morning and it didn’t look that big to me. I’ve fought in big stadiums but this is new to him. Usually Floyd Mayweather would be sitting ringside to support him, but Floyd will be busy on Saturday night, everyone else who is normally around him will be busy that night. The problem with surrounding yourself with people for comfort is when you step through the ropes you are all on your own.

Jack will have trained hard and got himself in good shape. He’s got to hope that after a few rounds he’s still in the fight and he can gain some momentum from there but we don’t plan to let him do that. I don’t need to rely on mental weaknesses – he’s got them. This is his first fight as a champion. I can’t relate to that because I’ve never been a world champion but I’ve been in some super high-pressure fights and I’ve always boxed well, win, lose, or draw. Let’s see how Jack does under the pressure of being a champion.

Every fight you feel pressure. I feel pressure. My last fight against Denis Douglin, even though no one had heard of him, was a high-pressure fight because I can’t lose that. This one, same again. People are telling me it’s my third fight for a world title and I can’t lose. I know what that’s like to lose a world title fight, it forced me to take a massive step back. It’s taken me a year to get back in this position. I don’t want to waste that, and I’m not going to.

The fact I haven’t had the pressure of promoting a fight, of trying to sell a PPV – like against Carl Froch – means I have had nine months to prepare for this fight. When does any boxer at this level get the luxury to do that? We’ve had three mini-camps where we’ll peak and then go on holiday for two weeks, relax, come back, and train again. We’ve done two months out here at Big Bear where I’ve had my phone off, I haven’t spoke to anyone. People haven’t recognised me. And talking to people, to strangers who may want to say something nice or nasty, takes up energy. I’m not a big talker. I don’t like talking.

Maybe in time I’ll appreciate it but right now I couldn’t care less about fighting on a Floyd Mayweather card. The fact of the matter is, I’m boxing at the MGM Grand, for a world title. It’s something you dream of as a kid. I’ve experienced many, many things in my professional career but I plan to win this world title and build from there.