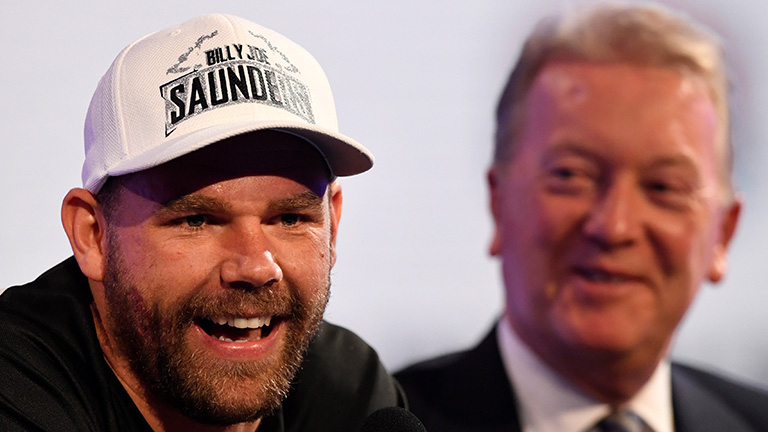 Frank Warren reveals that an official offer has been made to Gennady Golovkin to fight Billy Joe Saunders, but it won't happen until September

In a conversation with Boxing News, Warren confirmed that Gennady Golovkin and his promoter Tom Loeffler are open to taking on Saunders in September, but had rejected his offer of a bout with Billy Joe Saunders in June. This is because the WBA, IBF and WBC king will fight in Las Vegas on May 5 against an opponent to be decided, with Spike O’Sullivan the current favourite to step in following Canelo Alvarez’s withdrawal.

Alvarez this week pulled out of the bout as he struggles to clear his name after clenbuterol was found in his system during two failed drug tests in February. An April 18 hearing was to be carried out by the Nevada State Athletic Commission, and Alvarez insists the illegal substance was found in his bloodstream as a consequence of contaminated meat eaten in his native Mexico which has been the go-to excuse for athletes caught out in recent years.

There has been talk that Alvarez’s shot at Golovkin – a rematch of a controversial draw the rivals shared in a September 2017 superfight – would be moved to September this year, but Warren is adamant that, if guilty of taking Performance Enhancing Drugs, Alvarez must be punished.

CONTAMINATED: Alvarez’s reputation is in tatters after clenbuterol was found in his system

“I don’t think he [Canelo] can just be forgiven,” Warren said. “He has been caught and if he is guilty, he has to get a ban which is one-year in Nevada, I believe.”

Warren added that Saunders stepping in for Canelo on May 5 was never an option, with Billy Joe making his way back to full fitness following an injury that will rule him out of sparring until April 14.

Warren has said that he hopes to hear back from Golovkin’s team regarding his September proposal “by the end of the week” and, in the meantime, Saunders will continue to prepare for June 23 defence against Martin Murray at the O2 Arena.