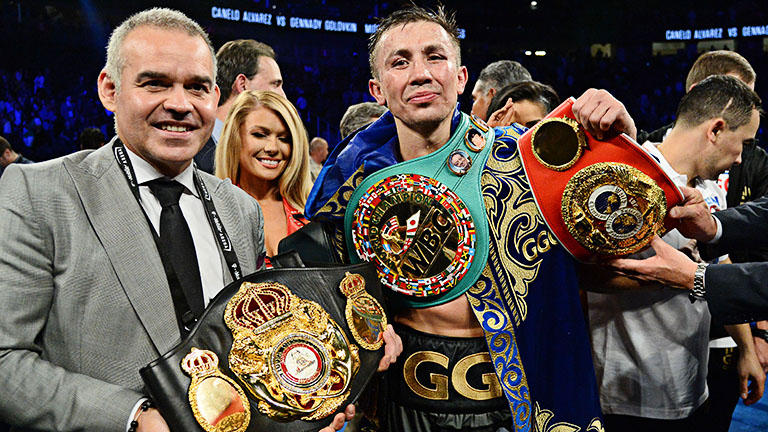 'One of the judges turned up with a scorecard already written'

GOLDEN BOY’S Eric Gomez – who represents Canelo Alvarez – asked the media to not to just focus solely on Adelaide Byrd’s mind-boggling 118-110 scorecard in the Mexican’s favour, but few in the media could focus on anything else. The fight that led to the controversy was indeed a sumptuous one, but the greatest sporting events never leave such a nasty taste. And for Gennady Golovkin, it’s a taste that’s going to take some shifting.

When a decision like this occurs very often the reaction of the fighters is telling. While Canelo concluded the post-fight press conference somewhat triumphantly when he declared this was “the Canelo era”, Gennady Golovkin’s reaction was only of disappointment.

“This is terrible for the sport of boxing,” said Golovkin. “If these judges can do this, it’s terrible. I saw the total punches on the computer [punch stats], I saw the reaction to the decision, and everything is wrong.”

The WBC, WBA and IBF middleweight champion’s promoter Tom Loeffler added: “It takes everything away from the performances of the fighters in the ring.

“I don’t see how she [Byrd] could score 10 rounds to two the other way but he’s still the champion. It could have been worse.”

And that’s the bright side in all of this. Not the glorious action or skill, but relief that Golovkin – for so long unable to secure a fight like this – did not lose his unbeaten record or titles as a consequence of incompetent officiating.

Golovkin’s trainer, Abel Sanchez, admitted he was concerned about Byrd before the fight.

“Unfortunately one of the judges turned up with a scorecard that was already written. I had some issues with her when we got the list of judges because of her erratic performances.

“Something has to be done about the decisions, it’s not fair on the fighters.”