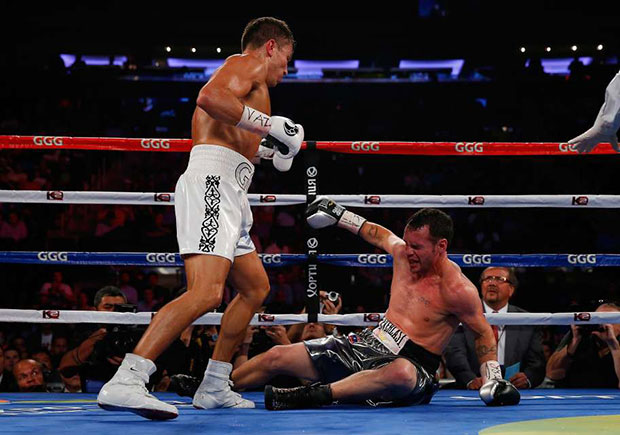 AS Daniel Geale landed a flush right hand on Gennady Golovkin’s face he flashed a slight grin, the Australian was pleased with his work. Unfortunately, the feeling was fleeting, as within the next few seconds he would find himself on the floor, wondering where he was and how he got there, whilst scrambling to find his senses. It’s a familiar position for Golovkin opponents. No matter how experienced they are, they seem unable to comprehend and avert the danger they face.

Since Sugar Ray Robinson hung up his legendary but well-worn gloves there have been three lineal middleweight champions with a reign of historic repute. Brutal boxer-puncher Carlos Monzon retired with the title in his hands having taken it off Nino Benvenuti seven years previously. Marvin Hagler then enthralled the 80’s fight fan with some breathtaking bouts against the likes of Ray Leonard and Thomas Hearns. Later down the years, Bernard Hopkins accumulated a succession of alphabet world title defences before cementing his legacy with a stunning stoppage of Felix Trinidad.

Golovkin is not yet the holder of the lineal title at 160 lbs – to do that he must beat Miguel Cotto – but he has exhibited signs that he may have what it takes to join the aforementioned Monzon, Hagler and Hopkins in the land of middleweight icons, and here’s why.

Patience and ring intelligence: As seen with Bernard Hopkins

Hopkins has never been a man to rush things. Even now at an age most have long retired by, he continues to set his own pace. Every move has meaning, each punch a point forced home to his opponent. Hopkins enhanced his middleweight reign when he broke down Trinidad over twelve rounds, waiting until the final round to finish the Puerto Rican star. Golovkin enjoys biding his time, too.

‘Triple G’ exudes an authoritative calm in the ring. He stalks his prey ushered by the knowledge that he will hit them, and when he hits them, he will hurt them.

His poise and willingness to wait for the right punches to come is akin to Hopkins, and his intelligence is equally evident in his effective cutting down of the ring.

Aggression and endurance: As seen with Marvin Hagler

The sight of Hagler’s shiny bald cranium following an opponent around the ring had the air of the inevitable. He circled his victims incessantly, closing down space and crushing their willpower. Golovkin is a technically refined boxer, but he fights with inherent aggression. It may not be as intense as that of Hagler, but it works just as well.

The Kazakh has also proven himself to have a good set of whiskers. Head movement is not his forte, and thus he does receive shots, but as shown against Geale on Saturday night, punishment does not deter him. Hagler’s frenzied attacking style required the ability to endure incoming fire, something Golovkin has also shown himself to be capable of handling.

Sophistication and savagery: As seen with Carlos Monzon

Monzon fought like a well oiled machine. His combinations were not the most varied, instead he stuck to the punches that worked, then landed them over and over again. His dull, thudding power laid waste to all of his title challengers, many within the scheduled distance.

Golovkin’s fighting style is similarly efficient and ruthless. The naked aggression comes out when the end is in sight, but until then punches are thrown without waste. It’s a methodical yet classy form of fighting, and one that works well for him as it did for Monzon.