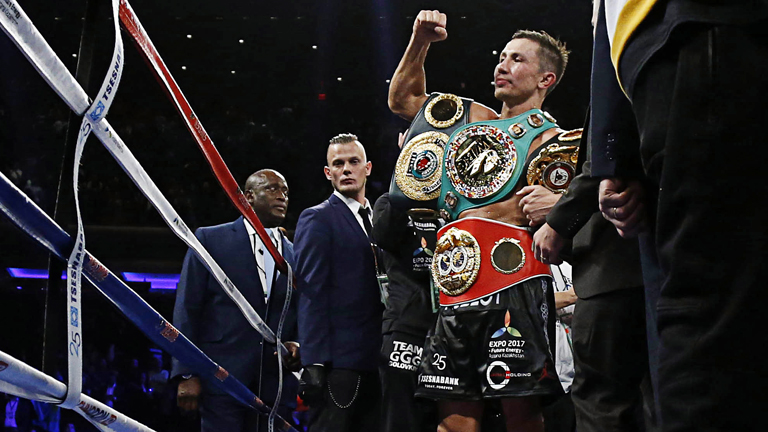 FOLLOWING his close – and disputed – unanimous decision victory over Daniel Jacobs inside New York’s Madison Square Garden, world middleweight ruler Gennady Golovkin declared that he was satisfied with his performance, and was always confident that the result would go his way

“I think I won. I felt very comfortable [when the result was about to be announced],” Golovkin said at the post-fight press conference. “Sometimes I was waiting too long [to get punches off], but Daniel is a very good fighter. He didn’t lose control [of himself]. I didn’t have a problem with his speed – speed is good. It was a very good fight and a very good experience for me. In the championship rounds, I still felt that I had a lot of power, a lot of speed. I wanted the fight to go on longer.”

During the bout, Jacobs’ switch-hitting style seemed to cause Golovkin problems – especially when the Brooklyn man operated from a southpaw stance. However, while “GGG” described Jacobs as his “best opponent”, he also declared that Daniel’s tactics did little to frustrate him.

Golovkin stated: “Daniel is very smart. A very good boxer. But he didn’t confuse me. Not a lot. I wanted a crazy fight, but he didn’t lose control. I had to fight a smart, quality fight.”

When asked whether he would give Jacobs a rematch, Gennady replied, “Of course. I’m a boxer. It’s my job. I’m ready for anybody.” Yet when pushed on what his dream next fight would be, the Kazakh king responded, “My goal is all the belts in the middleweight division. [WBO titlist] Billy Joe Saunders is the last step of my dream. Hopefully we could have the fight in Kazakhstan. I’d want that fight next – 100 per cent.”