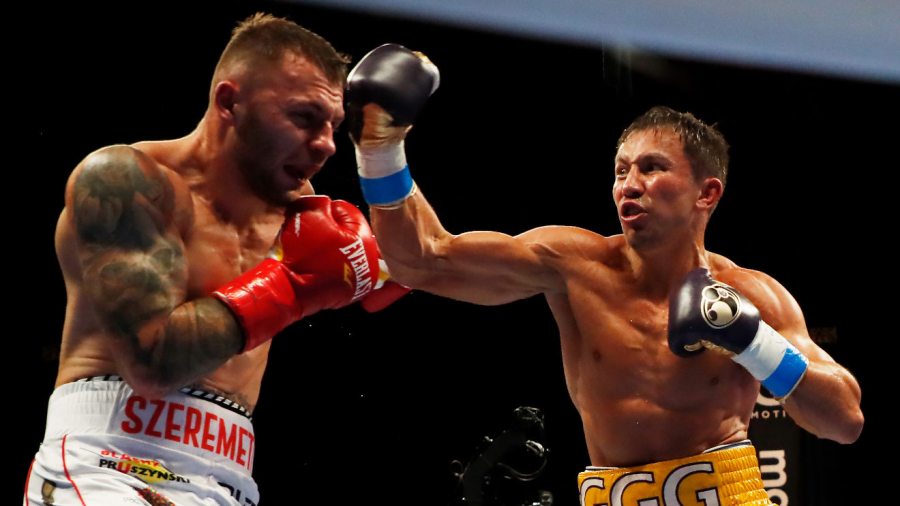 GENNADY GOLOVKIN did exactly what was expected when he hammered his IBF mandatory challenger, Kamil Szeremeta of Poland, to defeat in seven one-sided rounds inside the Seminole Hard Rock Hotel and Casino in Hollywood, Florida.

There were four knockdowns in what was 38-year-old Golovkin’s 21st successful middleweight overall title defence across various reigns and sanctioning bodies. On paper, it means that the Kazak has now recorded more winning defences than any middleweight champion. But with so many alphabet belts available (including that impossible to follow WBA title in all its diluted guises) and undeserving challengers like Szeremeta around, those screaming that “GGG” is a bona fide record breaker with this latest victory are doing a disservice to the division’s long and illustrious history.

In the same way that Bernard Hopkins’ run of 20 defences could not be fairly compared to Carlos Monzon’s time atop the 160lbs weight class, Golovkin’s stats say more about the current era of fractured championships than anything that came before. Even so, that Golovkin remains such a formidable force as he closes in on his 39th birthday is indeed impressive.

Szeremeta, seven years Golovkin’s junior, came with ambition and tagged his illustrious opponent with a right hand in the opening round. But the IBF boss instinctively returned the favour as a right uppercut buzzed the challenger and a left hook dropped him. The Pole found his feet and was grateful for the bell that soon followed.

Golovkin has slowed slightly over the years but, when he has the scent of blood in his nostrils, he remains one of the most impressive in the entire sport. Into round two and a spiteful right hand clattered into Szeremeta, landing with a crack on the side of his head, that dropped him for the second time. With approximately 30 seconds left in the session, the underdog – somewhat generously priced at 9/1 – clung onto his rival to stem the tide.

There were no knockdowns in the third but Golovkin dominated, his ramrod jab was accurate and he varied his raids upstairs and down. A left hook dropped the challenger for the third time in the fourth round as the bout lost all semblance of being a contest. The mugging grew increasingly painful when the veteran ploughed a savage left into Szeremeta’s body.

A chopping left hook decked his overmatched foe again in the fourth.

The fifth was quieter but Golovkin was on the attack again the sixth. Szeremeta managed to survive but he was dropped for the fourth and final time in the seventh, this time from that strong jab and the referee Telis Assimenios accepted the corner’s surrender at the end of the round.

In the end, it was the mismatch most expected, another exhibition of rankings that fail to rank accurately. Yet another outing for Golovkin where he is head and shoulders above his opponent. He deserves better, particularly at this stage of his career. Descending he might be, but he’s only edging ever so slowly down the hill.

Get the man a fight and opponent befitting of his talents before it’s too late.

On the undercard, Londoner John Ryder – in America to keep busy and step in to face Canelo Alvarez or Callum Smith if either had dropped out prior to their bout the following day – outpointed 39-year-old Sacramento stalwart Mike Guy over 10 rounds.

The bout, refereed by Chris Young and Ryder’s first since losing a contentious decision to Smith 12 months ago, was not exciting. The Englishman seemed to content to get the rounds under his belt and, though the archetypal ‘stay busy’ bout, the action remained at a fairly low tempo. Nonetheless, it leaves Ryder in a solid position to challenge for titles in 2021.