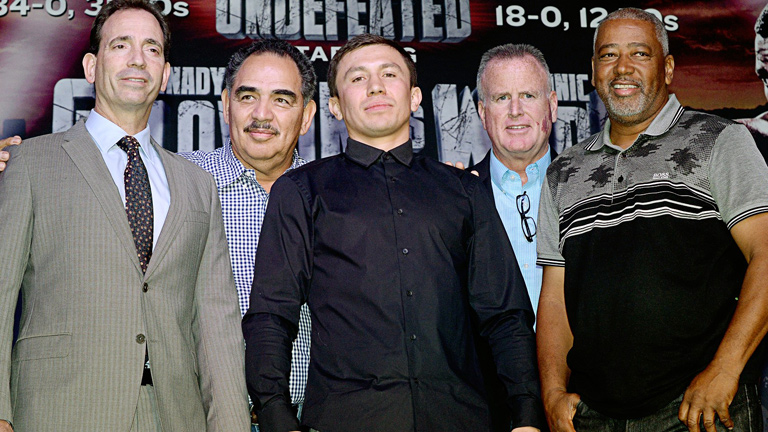 Gennady Golovkin is more than willing to travel to the UK to fight Eubank Jr, Tom Loeffler tells George Gigney

TOM LOEFFLER, promoter of Gennady Golovkin, is still working hard to finalise a fight between ‘GGG’ and Chris Eubank Jr.

He remains hopeful that a deal can be made, though is conscious of the fact that fights with two other Brits – Billy Joe Saunders and Carl Froch – failed to materialise.

Negotiations are reportedly in advanced stages, with Eddie Hearn, who represents Eubank Jr, remaining confident that they will be wrapped up in the very near future.

“There’s not much to report now, just working diligently on the next GGG fight, hopefully we can get it done with Eubank,” Loeffler told Boxing News.

Eubank signed a new promotional deal with Hearn’s Matchroom Boxing earlier this year with a strict plan to get a fight with GGG in the UK. As it stands, all signs point towards that happening, perhaps some time in September.

In interviews and on social media Eubank Jr has frequently called out Golovkin, though last year Froch did the same in a tweet he later claimed was made in jest. He is now, of course, happily retired.

Too big & too strong for GGG… pic.twitter.com/WIfhNImCIk

WBO champion Saunders, who holds the only 160lb world title not owned by Golovkin, insists he is eager to fight the Kazakh wrecking ball, while Loeffler has previously claimed negotiations for that unification fight have failed in the past.

Loeffler reiterated that a fight with Golovkin – one of the most active elite-level fighters around – is there for Eubank Jr if he wants it.

“It’s up to Eubank if they want to fight for GGG’s titles, GGG has made it clear that he would come to the UK to fight, just like he would have with Froch and Saunders, except those fights couldn’t get made unfortunately,” he said.

“Hopefully Eubank has more desire than those two, as he states in his public comments.”

Golovkin’s prime target is Canelo Alvarez, though it looks as though the 34-year-old will have to wait as Golden Boy Promotions recently claimed a verbal agreement has been reached for the two superstars to fight in September 2017.

Instead, Canelo – who has fought his last few fights at a 155lb catchweight – will return to super-welterweight to challenge WBO boss Liam Smith on September 17.

Though a fight with Saunders carries the allure of creating an undisputed middleweight champion – the first since Bernard Hopkins’ five-month reign from 2004-2005 – the Eubank Jr clash would see Golovkin handsomely rewarded thanks to the pay-per-view and box office revenue it is likely to generate in the UK.