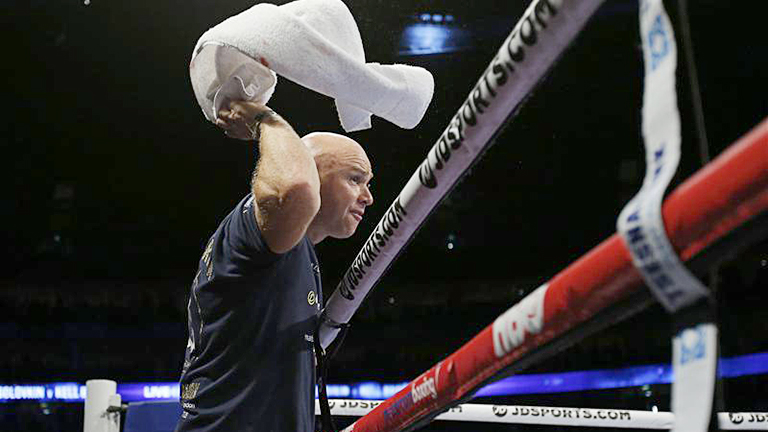 Gennady Golovkin and his trainer give their view on the Kell Brook stoppage, writes John Dennen

GENNADY GOLOVKIN gave his view on his latest middleweight title defence and the fifth-round Kell Brook stoppage. He wanted to brawl, rather than rely on technical skills, their clash at the O2 on Saturday.

“I want more of a street fight,” he explained.

He had ground down the gallant and at times brilliant Brook by the fifth round. Kell’s trainer Dominic Ingle pulled him out during that session. Golovkin believed it was definitely the right call. “I think it’s smart. I respect his corner. I respect his coach because, seriously, the last round he feels very bad. He can’t breathe, he can’t move and he’s finished. I think it was smart,” Gennady said.

Golovkin’s trainer Abel Sanchez added, “I was worried that they weren’t going to stop it. That’s how you get seriously hurt, in the last round, in the last 20 seconds when the referee didn’t see the towel waving if you go back and look at the tape he got caught with eight, nine, clean punches. They may not have been devastating punches but those are the kind of punches that hurt you. They hurt you permanently. That’s what I was worried about, I was worried they were going to be too brave. Kell’s a warrior and a brave warrior. He’s not going to give up. We have to be smart in the corner, we have to be smarter, we can’t let the 20,000 coaches in the audience dictate what happens to our fighter. And Dom did the right thing.”