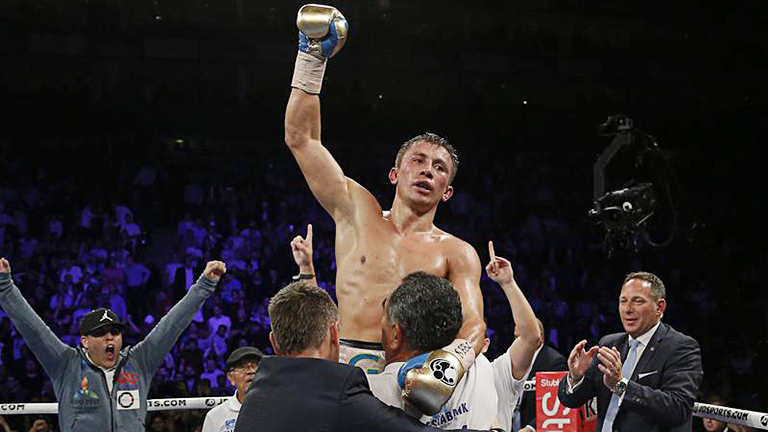 Will we ever get to see Gennady Golovkin vs Canelo Alvarez, wonders John Dennen

IT seems reasonable to ask whether we will ever get to see Gennady Golovkin fight Saul “Canelo” Alvarez. This year seemed to be the perfect time, the WBC even mandated for Canelo to fight ‘GGG’. The Mexican though vacated the title and dropped just a pound to go back down to the super-welterweight division. Golovkin has had to bide his time.

After his latest victory, Gennady said next he wanted “first of all Billy Joe Saunders or Canelo”.

It was unclear though whether Golovkin was confident of ever actually nailing down a clash with Canelo, whether it be next year or the one after. All he would say about getting the Alvarez fight was: “Hopefully. I hope in the future. Maybe after today, he’s ready. I hope seriously. I want this fight.”

Gennady’s latest challenger Kell Brook stepped up from welterweight. He didn’t hurt Golovkin but he did find the openings for punch combinations as well as excellent uppercuts. The Kazakh insisted he didn’t feel weight in those blows but Kell caught Golovkin far more frequently than the vast majority of his challengers and even obliged Gennady to take a backwards step, a rare feat. That might have caught Canelo’s eye.

“Kell Brook was hitting him clean, he was hitting him with uppercuts, a lot of combinations. For me it’s never great to see him get hit clean like that but at the same time I’m sure a lot of fighters saw that and said, ‘Well if Kell Brook can do it, maybe I can do it.’ And maybe that’ll given them some courage now to actually sign a contract,” said Tom Loeffler, Golovkin’s promoter. “It’s a double-edged sword. If Gennady is so dominant nobody wants to fight him, it just makes it even more impossible to make the fight. So it’s definitely a two-way street.”

Brook’s promoter Eddie Hearn added, “Canelo’s running from him. It’s none of my business but as a fan I want to see Gennady Golovkin against Canelo. It’s the biggest fight in world boxing. How can you ignore that fight and vacate your belt?”

Golovkin would consider moving into a higher weight division at some point, but feels he has unsettled business at middleweight. “I have a dream. My goal is all the belts in the middleweight division. After yes, seriously,” Gennady said. He might be forced to move up if the big fights for him remain so elusive.