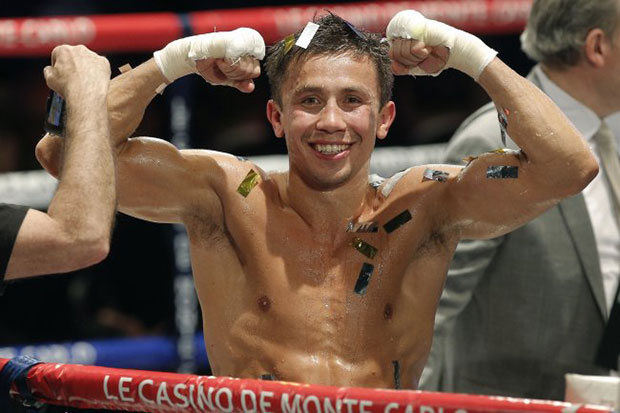 That title belongs to Miguel Cotto and Golovkin must show he wants it, writes Jack Hirsch

THIS Saturday evening, Gennady Golovkin finally gets his opportunity to work the big room of Madison Square Garden, when he takes on Daniel Geale. His prior engagements at MSG had all been at the famed historic venue’s smaller arena, The Theater.

The big building is reserved only for star attractions, something Golovkin has now become. Golovkin is arguably a lot of things, a great fighter included. What he is not is the true world middleweight champion. For that he primarily has himself to blame.

For a time Golovkin was a victim of his own prowess. His performances were so dominant it became apparent that he was the best middleweight in the world. Then champion Sergio Martinez was in no rush to box him to put it kindly. It was a fight that Golovkin figured he would eventually get, but Martinez stretched out the shelf life of the match by taking on Martin Murray in a homecoming fight in Argentina, then citied injuries that necessitated a long layoff.

Last month Martinez defended the world middleweight title against Miguel Cotto. It was a lucrative fight and one that Martinez’s backers were confident their man would win. It gave him a big payday and a chance to avoid Golovkin some more. Instead of being outraged and accusing Martinez of ducking him which he was, Golovkin flashed that boyish grin, one which endears him to people but gets Gennady no closer to the world championship – the real one not the WBA belt he holds.

The math is simple. No need to go too far back in time, the evidence presented here is enough. Bernard Hopkins lost the world middleweight title to Jermain Taylor, who lost it to Kelly Pavlik, who lost it to Martinez, who was stopped by Cotto. That makes Cotto the real middleweight champion, not Golovkin. I hope Golovkin understands this. And if Golovkin thinks main eventing in the Garden puts him on Cotto’s level, he is deluding himself again. Madison Square Garden is Cotto’s home, Golovkin is just visiting for the night.

At the press conference three days before the fight, Golovkin turned to opponent Daniel Geale and said: “I respect you and your team.” That was nice to hear, but it would have been in his best interests had Golovkin called out Cotto. Hopefully he does at the press conference after the fight on Saturday. For you see, Cotto has no more intention of fighting Golovkin as did Martinez. Cotto’s first fight as a middleweight was against Martinez for the title. His first defense will probably be against Saul “Canelo” Alvarez who himself has never fought in that division. How can we argue about the injustice of all this if Golovkin himself does not object?

Golovkin, 29-0 (26), has stopped his last 16 opponents. He has looked mighty impressive in doing so. This will be the 11th defense of his WBA middleweight title. With credentials like that it is understandable why he thinks of himself as a world champion. Golovkin and his followers though are in denial. As great a boxer as he is, Golovkin can beat all the Daniel Geales of the world and still won’t be the true middleweight champion. That can only be accomplished by defeating Cotto. That fight though is not likely to happen. The sad part is that Golovkin at least outwardly does not seem to care.