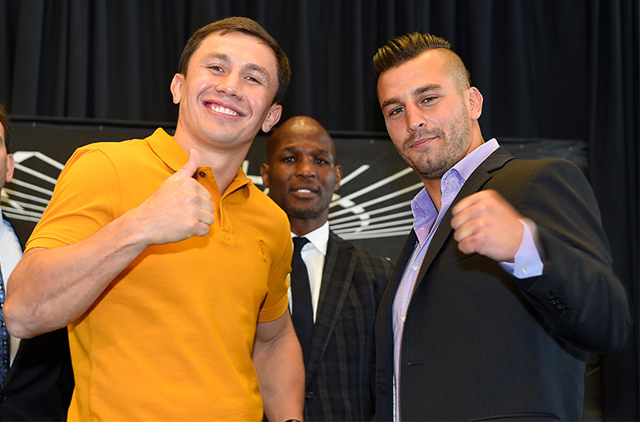 Against Lemieux Golovkin takes his most significant fight yet, writes John Dennen

GENNADY GOLOVKIN cuts an assuming figure at a press conference. Far removed from the destroyer who has terrorized boxing rings from Monte Carlo to California, the WBA middleweight champion spoke quietly and respectfully when he came face-to-face with his next opponent, David Lemieux, in New York on Tuesday (August 18).

“I respect David. I like his style. He’s a very strong guy. He’s a very dangerous guy,” Golovkin said of the Canadian. “I think it’s very interesting for everybody. I promise an amazing show.”

It is Golovkin’s most significant fight yet. It is a unification clash with Lemieux, the IBF titlist and the first reigning world champion Golovkin has fought. It will be his first appearance on HBO pay-per-view, which will cost $49.95 in the US. It will also lead the winner to the victor of the Miguel Cotto-Saul Alvarez November 21 WBC middleweight championship fight.

The WBC’s Jill Diamond said, “The winner will have the right to fight the winner of the great fight between Cotto and Canelo for the undisputed WBC championship.”

The fight itself is intriguing. Few have managed to test Golovkin, he has impressed, and built an impassioned following, with the devastating style of his finishes. On odd occasions the Kazakh has been tagged and, worryingly for his prospective opponents, has given every indication of solid resilience. The Canadian does however have explosive punch power, if he can land, he might just be able to trouble Golovkin.

“With this fight against Golovkin you can expect what you see, two hard punchers going at it. The fight speaks for itself I don’t have to add too much. It’s going to be an explosive fight. But a lot of you are going to have to be ready for change,” Lemieux said.

“You have to be ready for anything in boxing. I’m ready to take the belt and to be the unified middleweight champion. That’s why I took the fight. Because I’m very aware of my abilities. I’m very aware of Golovkin’s abilities. I respect him a lot. He’s a great fighter and has had a great mark on the middleweight division but I’m not here to be his friend. I’m here to be his opponent. On October 17 we’re going to fight. There will be blood. It’s going to be an exciting event and I’m very confident in my abilities.”

Looking the champion, his extraordinary coiffure sweeping down the centre of his head, the dark hair shaved to the skull on either side, Lemieux mused, “Who would have thought a kid like me, smoking cigarettes at nine and 10 years old, would one day fill up Madison Square Garden. I came a long way to be where I am. I worked hard and I’m extremely proud to be part of it all, for you all to listen, for the world to be watching.

“Hopefully you will be experiencing history in the making on October 17.”

Golovkin did acknowledge Lemieux’s qualities. With a smile he confessed, “I’m a little bit scared.” You have to wonder though if the fearsome Kazakh is only being polite.