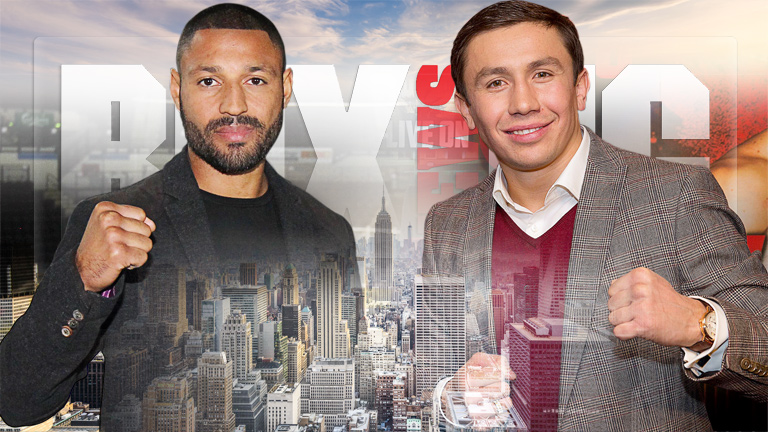 Gennady Golovkin is frustrated at a certain group of fighters

GENNADY GOLOVKIN has laid down the guantlet to Canelo Alvarez, Chris Eubank Jnr, Billy Joe Saunders and Carl Froch ahead of his September 10 meeting with Kell Brook.

All four have been linked to fights with ‘GGG’ though none have come to fruition and instead Golovkin will defend his WBC, WBA and IBF world middleweight titles against Brook, the IBF’s welterweight champion who will jump two weight classes.

A few weeks out from his blockbuster clash with Brook at the O2 Arena in London, the Kazakh wrecking ball has expressed frustration at fighters name-dropping him.

“Just too much talking about fighting me, Canelo, Eubank, Saunders, Froch they are acting like clowns with no respect for the sport. I’m here now, sign the contract and fight me, any of them, doesn’t matter which one,” he said.

The 34-year-old, and his promotional team, have shown a willingness to fight anyone and keep Golovkin as active as possible.

Some have suggested ‘GGG’ should head north and move to super-middleweight, where fighters like James DeGale have also said they would face him.

However Golovkin is hellbent on unifying the 160lb division and does not see the point in moving to 168.

“Move up to 168 for what? Who is going to fight me there? Which champion at that weight will agree to fight me for a big fight? he queried.

Naturally, his sole focus right now is Brook. Saunders holds the only world middleweight title Golovkin has not yet laid his destructive hands on, but Gennady remains sceptical about his chances of getting Billy Joe in the ring.

“Right now my focus is on Kell Brook, he signed the contract and that’s who I’m ready to fight, I have a great deal of respect for him,” he continued.

“This is my first fight in England and I’m very excited to fight in a new country.

“Yes I want to unify the middleweight division titles but I don’t know if WBO Champion Billy Joe Saunders will fight me.”