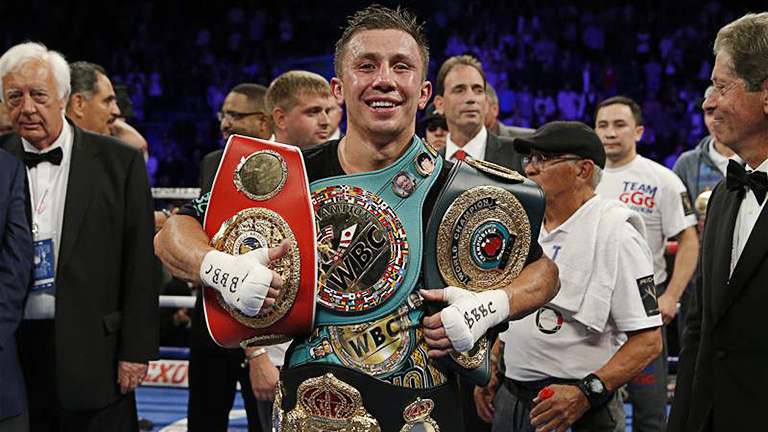 GENNADY GOLOVKIN’S triumphant visit to the UK culminated in a thrilling victory over Kell Brook. Golovkin holds the WBC, WBA and IBF middleweight titles. The only major belt outside of his grasp is Billy Joe Saunders’ WBO 160lbs title. Golovkin is coming for that next.

“My goal is all the belts in the middleweight division. I want unification fight, Billy Joe Saunders,” Gennady declared.

‘GGG’ would come back to London for that fight. “Absolutely,” Golovkin said. “I love it, the atmosphere, I love it, huge fan of London absolutely.”

Gennady’s promoter, Tom Loeffler said, “We tried to make that fight here in the UK before we even had discussions with Eddie [Hearn] and so hopefully when Billy Joe sees the reaction that he’s gotten here in the UK. From what I understand the Sky Box Office did very well tonight, maybe he’ll have more incentive to actually get in the ring. But you never know. Like Gennady says he’s open to fighting anyone and whoever’s out there, Gennady always makes a great fight.”

Plan B could Danny Jacobs, the New Yorker who holds the WBA’s secondary or ‘regular’ middleweight belt. “We understand the WBA is going to order the mandatory with Jacobs. Jacobs just fought on Saturday, that would be a great fight. We’ve got a lot of respect for Danny Jacobs hopefully we can make that fight,” Loeffler continued. “We’ll start the negotiations with Jacobs and see how far we get. Just because the WBA orders it doesn’t mean he’ll take the fight, doesn’t mean we can make the fight.”

As exciting as ‘GGG’ is, he is not someone who’s been easy to match. He’s a real threat to anyone in his division. “It’s a very serious business. It’s boxing,” Golovkin warned.