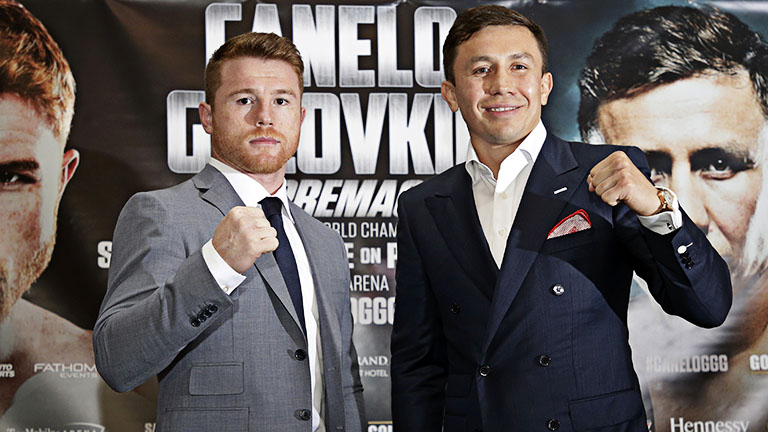 GENNADY GOLOVKIN may be a brutal puncher but he is an understated man. The WBC and WBA middleweight champion however can’t hide that he looks toward the September 15 rematch with Canelo Alvarez with genuine bad intentions.

Not only was Golovkin frustrated by their first bout controversially being scored a draw, the Kazakh was outraged that their rematch had to be postponed from May to September after Alvarez failed a drug test. Traces of clenbuterol were found in his system, that he and his team attribute to eating contaminated meat.

The champion condemned them all. He suggests that Alvarez should have changed his team. “I don’t feel respect for this team, not only Canelo. I’ve known Canelo for a long time,” he said. “This is very terrible for him.

“It’s 100 percent different, different mentally, a different performance. A lot of emotion. This is not only boxing fight, not only business fight, this is a true war,” Golovkin continued.

He also didn’t respect Canelo’s approach to the first fight. He had expected the Mexican to engage more, to stand his ground with Golovkin. “He talked too much before the first fight,” “GGG” said and Canelo, as far as Golovkin is concerned, didn’t deliver. “If he brings [aggression], if he attacks more, it’s more interesting,” the Kazkh continued.

“Show me your Mexican style,” he urged. “He moved too much.”

Now Golovkin wants to deliver something special on September 15. “I want to bring my true ideas, my true situation,” he said.

“Not only sport, only business,” Golovkin warned. “This is special.”