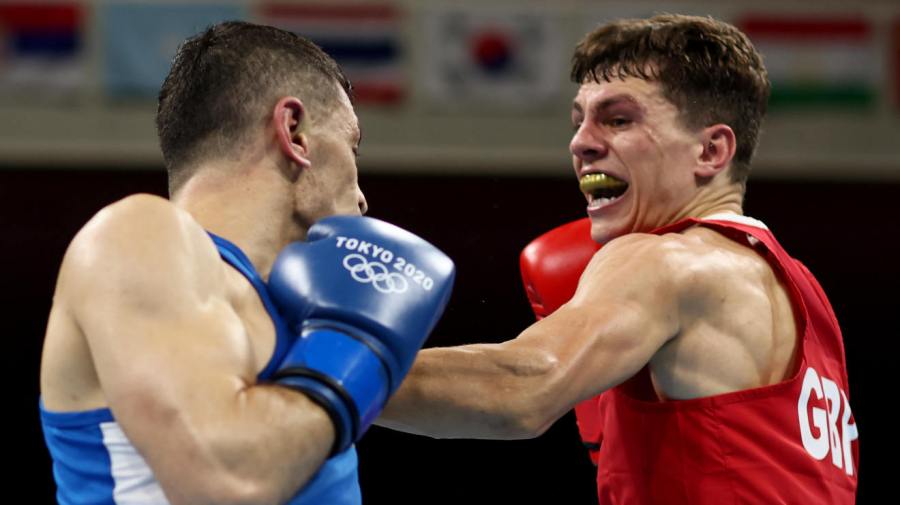 GB’s Pat McCormack and Ben Whittaker both won through to the semi-finals of the Olympic Games in Tokyo on Friday (July 31).

At the Kokugikan Arena McCormack contained rough Uzbek Bobo-Usmon Baturov. Baturov came on strong though. He roared as he clattered forward. But it was classy counter-punching from McCormack that secured him the first two rounds. He landed his crosses in exchanges and pivoted clear from Baturov to showcase his movement. In the third round Batuov ramped up the intensity even further, jumping into the Briton. A head clash cut McCormack just by his right eye but the Uzbek could not deny the Birtley boxer his split decision victory.

“It was a good fight. I got the first two rounds under my belt then I got cut in the third round because he was coming in with his head, throwing everything, the kitchen sink at me. But I got through it and got the win, so I’m over the moon,” McCormack said. “It’s unbelievable, it’s something I’ve always dreamed of, to get a medal at the Olympics.

“But now’s the time to change the colour. Gold is the dream and then I’ve completed amateur boxing.

Word from the GB camp is that this cut is minor. McCormack is now guaranteed a medal and will box Ireland’s Aidan Walsh, who outscored Mauritius’ Merven Claire in the same session, for a place in the final.

GB light-heavyweight Ben Whittaker is also assured a medal, but he only just edged Brazil’s Keno Machado out of their quarterfinal. The Briton controlled the distance between them over the first two rounds, making Machado miss but not vastly out-landing the Brazilian. The third round was crucial. Machado worked hard, going for the win, but Whittaker swung back up close and pipped him to take a split decision.

“It’s a bit weird. I’ve said after every fight that a bronze is nothing, a silver is nothing. But when you actually do get that feeling, I couldn’t help but let the emotion out of me,” Whittaker said. “I was crying, bogeys were flying everywhere! I tried to keep as calm as I could, but I couldn’t help it. I’ve got to compose myself and Sunday is when it gets real.

“He was a tall, rangy kid, and you don’t see many of them at my weight. I knew it would be hard but I had to stay composed and pull it out.”

“I would have liked to hit him more. There were times when I hit him with a lovely jab and I’d do a little dance and things like that,” he added. “I don’t want people to think I was showing off. I was doing that to frustrate him and bring him in, and on the odd occasion he fell in that corner and it worked.

“Everybody thinks it’s a brutal sport, but it’s an art at the end of the day.”

GB lightweight Caroline Dubois won a high quality bout with America’s Rashida Ellis. The result was in the balance in the third round, but Ellis’ discipline let her down. Hitting Dubois when the referee called break, she had a point deducted, meaning Dubois could calmly box off the back foot for the rest of the session and see out a points victory, winning a split decision.

“She was very funny. Before the fight she was all talking, being loud and cocky but I guess it’s just the way the Americans are,” Dubois said afterwards. “I didn’t let what she was doing bother me. My game was to win and get myself to an Olympic gold medal. She is just a hurdle. She is not the goal, she is just a hurdle on the way.”

“It feels like nobody knows me, nobody respects me,” she continued. “I’ve earned my place and I’m coming for a gold medal. I don’t want a medal, I want the medal. I want it bad, I want it more than anything I’ve ever wanted in my life.”

Ireland’s Kellie Harrington was also victorious. She unanimously outpointed Italy’s Rebecca Nicoli. “You’re in the Olympic Games and everyone who is here is top drawer. We’re all elite so there are no easy fights out there. We have had a hard graft to get here as well. Every fight is for a potential gold medal so it’s one step at a time,” Harrington said. “It feels good to get started. We left on the June 30 and now it’s the July 30. It’s been a month away, so it’s good to get going and in a good way. Happy days. I was getting anxious, it’s been a long wait. It’s sticky and warm, so you’re not really walking around much. You’re seeing your apartment and the food hall. I feel like I’m living in the food hall and for a boxer to say they feel like they’re living in the food hall is something else. This is a great journey, but this is not the destination. This is just part of my journey.”

US welter Oshae Jones guaranteed herself a medal when she outscored Dominican Republic’s Maria Moronta Hernandez on unanimous decision.