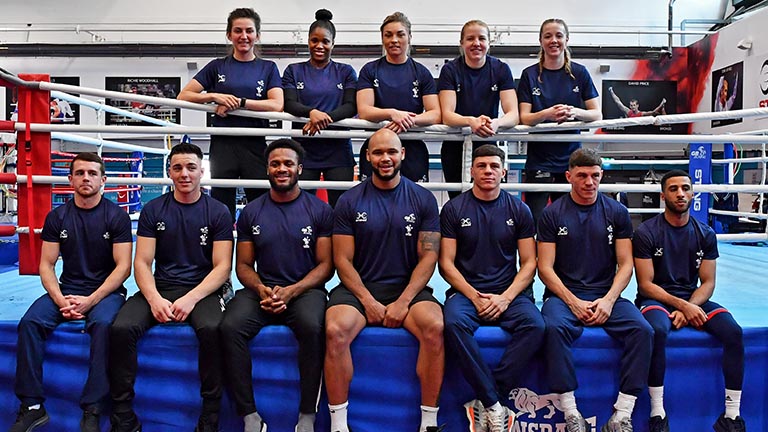 GB Boxing announce their team for the European Olympic qualifier, to be held at the Copper Box in London from March 14-24. Full breakdown of the side

It is finally the Burton super-heavyweight’s time. Clarke has been on the GB squad for the last two Olympic cycles. But he fell under the shadow of Anthony Joshua a decade ago and engaged in a furious battle with Joe Joyce, the eventual Olympic silver medallist, for selection ahead of Rio 2016. He could not overtake Joyce then but he has stuck to the course. Now he gets to go to his first Olympic qualification event. Years of hard work have gone into this for Clarke. Now the pressure is on to make it all count.

The compact, powerful 91kgs is exciting to watch. He is heavy-handed and attacks in a style that will translate well to professional boxing. But in the amateurs he has been unlucky at World championships, being drawn for instance against Russia’s Muslim Gadzhimagomedov in 2019 in Yekaterinburg before he could reach the medal stages. In the semi-final of the European Games he also met the host nation boxer, losing to Belarus’ Uladzislau Smiahlikau in the semi-final. But that bronze medal in Minsk still bodes well for his qualification attempt in March.

Whittaker, still only 22 years old, is one of the younger members of the team. But he has amassed experience. Although he disappointed at the 2018 Commonwealth Games, since then he has moved up to light-heavyweight and has maintained good form. Winning a silver medal at the European Games and a bronze medal at the World championships show that he can perform well at major tournaments. He boxes with style and confidence, expect him to carry that on into this London qualifier.

Middleweight had no firm favourite for selection. Jordan Reynolds is a warrior who has been pressing his case. Gifted welter Carl Fail has moved up to the division while young Mark Dickinson won the Elite national championships in England last year and dazzled at the some of the smaller competitions on the European circuit. He did not however make inroads at the majors. Welshman Sammy Lee is still a surprise selection. Lee won the Commonwealth Games at light-heavyweight in 2018 and entered the World championships last year at 81kgs too. It will be fascinating to see if he retains his bullish strength in the division below.

Pat McCormack is one of the key figures of the team. He is a veteran of the last Olympic Games and has been excelling since then. Over the course of the last cycle, it’s been rare for a major tournament to go by without McCormack medalling. He has matured and can control a bout with rare skill. Welterweight is always a competitive division, but McCormack, a World silver medallist, is expected to win gold in London.

If Luke and Pat both qualify for Tokyo 2020, they will become the first identical twins to box for Britain at an Olympic Games. The duo are an imposing force when in action over the course of a tournament. But they do have subtly different styles. While Pat can punch with spite, he generally boxes with cerebral control. Luke enjoys tearing into his opponents and letting his combinations fly. It’s a risk, especially in a tight three-rounder, but his belligerence makes him a must watch performer too.

With the shift around in weight classes, McGrail’s former bantamweight division went up by a kilo to 57kgs. For the Liverpudlian it’s a welcome change, he’s been making the weight since he was Youth boxer all the way back in 2014. In fact McGrail, even though he competed in the Youth Olympic Games all those years ago, this tournament will be his first shot at qualifying for the Olympic Games themselves. But he should go in confident. He has won the European championships before, in 2017 in Ukraine, and at the last World championships he was the only European to medal in his division. He will head to the event at the Copper Box looking to qualify of course, but he wants to win the tournament outright.

Yafai joins the squad as one of two returning Olympians (along with Pat McCormack above). But recently Yafai had to prove himself all over again in a new weight class. Only last year, it was confirmed that his previous division, 49kgs, would no longer be an Olympic event. He had to move up to 52kgs and test himself in the new division. Winning bronze at the European Games and beating Cuba’s Yosbany Veitia at the Worlds do however suggest that he can be successful a few kilos heavier. Flyweight in Europe though remains a tough division and Galal, the younger brother of professionals Kal and Gamal, could face stern competition to secure his spot at Tokyo 2020.

It is little surprise that the Welsh wonder is chosen for the first Olympic qualifier. Lauren Price has been outstanding. A fast, clever southpaw, who isn’t intimidated by any rivals in world she is the reigning World and European Games champion, achieving that feat all in the same calendar year. She is one of Britain’s great hopes not just to qualify but to medal at the Games in Tokyo.

The pick for the women’s welterweight division would have been a hard call to make. England’s Sandy Ryan is an experienced performer for the GB side. But although she beat Eccles in the final of the 2018 Commonwealth Games, they continued to cross paths in international competition. Eccles beat Ryan in the European Games last year to reach the semi-finals. Now she gets the first shot at Olympic qualification.

Is it time to believe the hype? No British boxer has achieved what Caroline Dubois has at Youth level. She has won the World Youth championships and the Youth Olympic Games and has never lost a bout. Dubois has also been recognised as the BBC’s Young Sports Personality of the Year. (She’s also the younger sister of British heavyweight champion Daniel Dubois, who readily says that pound for pound she is the best fighter in their family.) She hasn’t boxed in a senior competition so will she live up to her great expectations? I expect so.

Featherweight is one of the new divisions being introduced into the 2020 Olympic Games. Karriss Artingstall has come to fore in the weight class all of a sudden and in Britain she has made this spot her own. The Army boxer punches with clean, crisp power, the kind of shots that jolt an opponent’s head back and catch the eye of the judges. She could well be on a dream run to the Olympic Games.

The biggest surprise of the team for this Olympic qualifier is Charley Davison. She is picked at 51kgs, the division that had been dominated by none other than Nicola Adams over the last two Olympic cycles. Those are very big boots to fill. Davison only made it on to the GB squad at the last possible moment to be eligible for selection. The mother of three from Lowestoft joined the squad as recently as January, a month later she has won a place on the Olympic team and gets this fairytale opportunity.

Tickets for the European Olympic qualification event, March 14-24 at the Copper Box in London, are on sale now at https://see.tickets/boxingroadtotokyo with prices starting at £5 (£2.50 concessions) for many of the sessions at the biggest Olympic boxing event to take place in England since the 2012 Olympic Games.