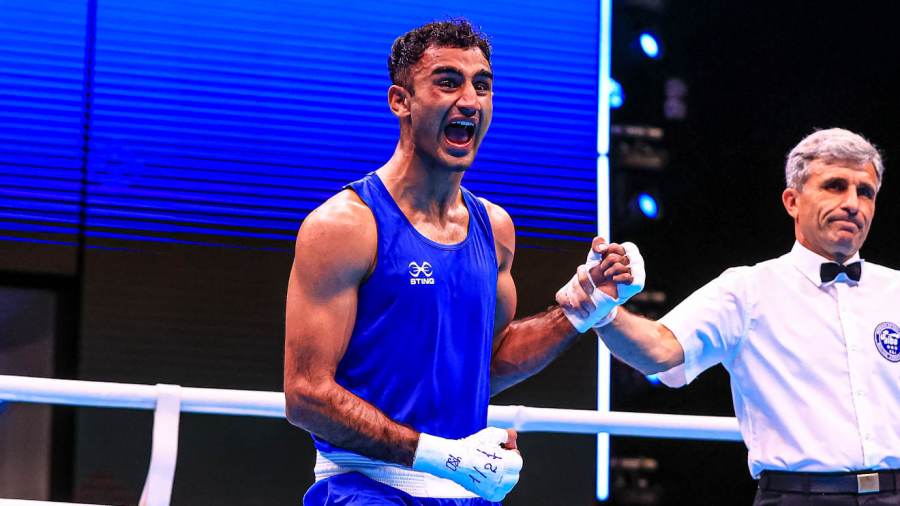 GB Boxers secured a remarkable haul of eight medals at the men’s European championships in Armenia with four of their boxers featuring in the finals on Monday (May 30).

The success of Great Britain’s boxers even saw squad-mates Harris Akbar, entering this event for England, and Wales’ Garan Croft contest the 71kgs final. It was a high quality match. They jabbed quickly, both moving in and out. Croft sent his right to the body but Akbar found the openings to send his cross down to the Welshman’s head. Akbar used his right well. In the second round a one-two set up his left hook. But Croft was always competitive and worked his left hook into the body. Akbar timed his straight shots well, ducking Croft’s whipping right hook at times. He came back well when the Welshman caught him and to close out the bout backed up cleverly to finish ahead of his rival, winning a unanimous decision.

In the semi-finals Harris Akbar secured a major victory over Ukraine’s Yurii Zakharieiev, the reigning World and European under 22 champion. It was all the more impressive as Akbar came back from losing the first round to wrest a split decision his way. It was special to Akbar personally too as he’d lost to Zakharieiev in the World championships himself. “I can’t put it into words. It feels surreal. To go in there and beat the World champion who beat me quite comfortably last year – what a feeling!” the Bradford boxer said. “Being able to avenge how I lost last time… It means the world to me.”

Croft had outpointed Germany’s Magomed Schachidov, also on a split decision, to book his showdown with Akbar in the final.

English middleweight Lewis Richardson met Ireland’s Gabriel Dossen in the gold medal match. The contest was in the balance. Dossen began the first round well, his handspeed apparent as he threw out jabs. Richardson came back strongly in the second round. A southpaw like Dossen, Richardson tracked forward aggressively, catching the Irishman with thumping backhands. Both fought wildly at times in the third but Dossen was determined, smacking his right hook across as time ticked down. Dossen edged him out on a close but unanimous decision.

In another all-British battle Richardson beat Scotland’s Sam Hickey in the 75kgs semi-final. Richardson took a split decision win in this clash of two GB squad-mates. Hickey will no doubt be hoping for rematch in the Commonwealth Games this summer but comes away from this championship with a bronze, Scotland’s first senior European medal in 16 years.

Sunderland Kiaran MacDonald impressed as he reached the final of the championship. In the preliminary stages he beat Scotland’s Lennon Mulligan and Ireland’s Sean Mari. Then he took a good semi-final win over Italy’s Federico Serra, coming back from a first round deficit himself to collect a split points verdict. But in the 51kgs final Martin Molina seized his opportunity. Much the smaller man, he still rushed forward to snap hooks into MacDonald. Kiaran got after him in the last round but could not stop a unanimous decision going to Molina. MacDonald therefore joins Richardson and Garan Croft as a European silver medallist.

Ireland’s Dylan Eagleson had a good tournament. He won the 54kgs silver medal, beating Bulgarian Daniel Asenov, a former European champion, in the semi-final. But France’s Bilal Bennama proved very tricky in the final, using his long reach to land his right on the southpaw before moving clear. He handed Eagleson a count in the second round and won a unanimous decision.