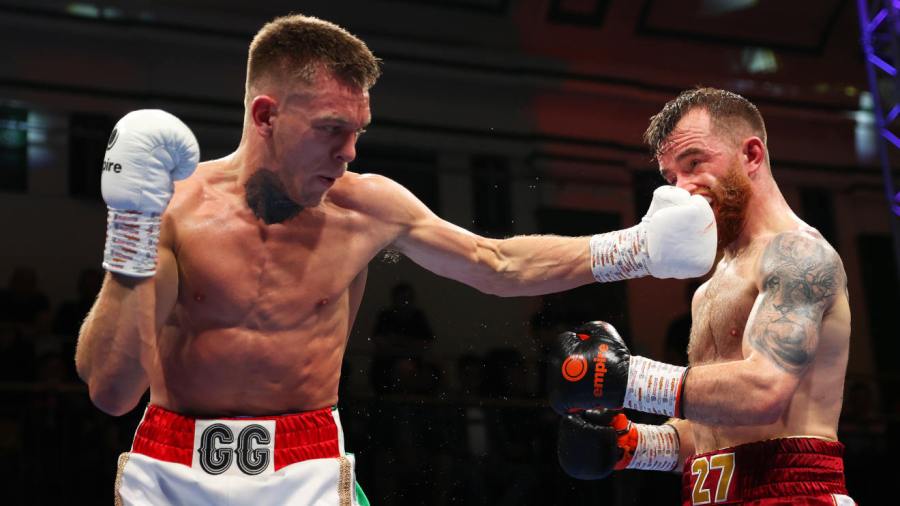 Gavin Gwynne added the British title to his Commonwealth belt, although Daniel Herbert saw a different fight from ringside

I must admit I saw a different fight, scoring a 114-114 draw with Willis dominating the early rounds before Gwynne rallied over the fight’s second half.

The tall Gwynne came forward throughout and threw plenty of punches, but for a long time he struggled to land cleanly on his shorter, powerfully-built opponent, who moved around the ring on nimble feet.

Willis countered skilfully and for me took the first five rounds before fading under the relentless pressure of Gwynne, who won the next four sessions in a row.

In the closing stages Willis maintained his movement but threw few punches, edging the 10th before Gwynne, who had worked the body well since the middle rounds, finished strongly to win the last two sessions.

Howard Foster refereed and was also a judge (along with Bates and Alexander) in the tremendous English super-welterweight title bout that saw Sam Gilley retain with a ninth-round stoppage over Drew Brown.

This scheduled 10 was superb entertainment, with both having their moments until Brown crumbled.

The Northampton man started fast, taking the first two rounds as he got inside and outworked Walthamstow’s Gilley. Sam had a swelling over his left eye, which was worsened by a head clash in the third, and when Brown boxed and moved more to take round four, it seemed the title might be about to change hands.

But Gilley – who looked the bigger man – rallied to win the next two sessions, only to drop the seventh before all hell broke loose in round eight. Brown was stung by a right only to hurt Gilley and have him bleeding from the mouth – before Gilley roared back to rock Drew again with a huge right-hander.

I had them level going into the ninth, but the scorecards were rendered irrelevant when a huge right sent Brown reeling into the ropes and then another right put him down. He was obviously spent and referee McCann waved it off immediately at the 1-47 mark, with Brown receiving medical attention before recovering quickly.

Kazakh super-feather hopeful Sultan Zaurbek was outboxing Nicolas Nahuel Botelli in the early stages of their super-feather 10 before the Argentinian shockingly dropped him with a countering right in round three. But Zaurbek gradually regained control and in the fifth put Botelli down with a left to the body, referee Bates completing the count after 41 seconds.

Dublin prospects Pierce O’Leary and Paul Ryan extended their unbeaten records in contests handled by Mr Bates. Super-lightweight O’Leary flattened France’s Nathan Augustine with a crunching left hook for a knockout after 2-41 of the first (set for eight). Super-welter Ryan, a southpaw, dropped Hungary’s Gabor Gabics in the first but had to settle for a 60-53 points win after six rounds.

Two English southpaw super-welters were victorious in six-rounders. Sidcup’s Elliot Whale was well on top when a head clash cut Fernando Valencia on the right eye and the Mexican’s corner withdrew their man at the end of round four. McCann refereed.

In a super-bantam six-twos Nina Hughes (Chadwell Heath) hardly missed against Bec Connolly, dropping the Swindon woman in the first with a right before hurtful combinations had her reeling to prompt Mr McEvoy’s intervention after 40 seconds of round two.

There was a successful pro debut for Rainham super-lightweight Jimmy Croxson, who made good use of his height and reach advantages to unload combinations on tough Fonz Alexander, although the Newark journeyman did win a round in referee McCann’s 39-37 score.

The Verdict The Gilley-Brown war overshadowed the main event and will contend for Fight Of The Year.