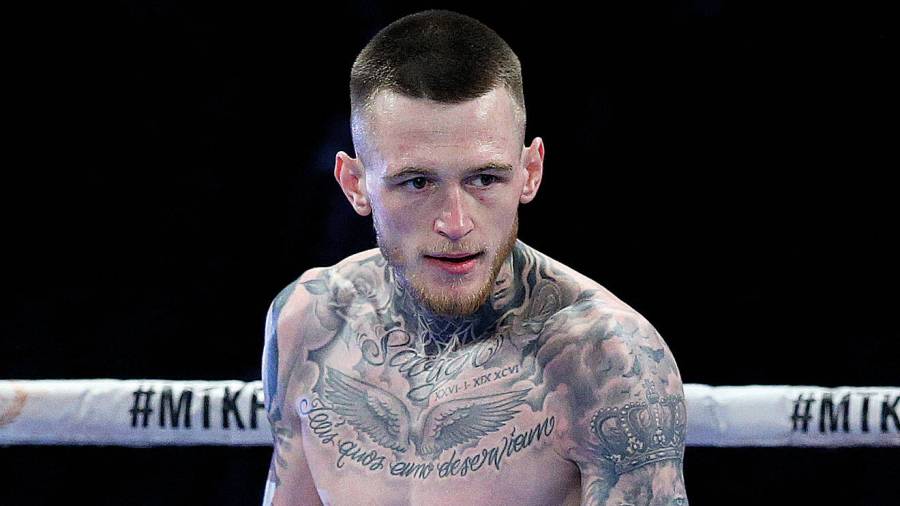 IRELAND’S Gary Cully was given the nickname ‘The Diva’ when his demands and need for everything to be exactly right raised eyebrows within the offices of his management team. It is, in this instance, a character trait rather than a criticism and Cully has so far used his attention to detail to good effect, racing to 13-0 as a pro and emerging as one of his country’s brightest prospects. He has high standards, clearly, both for himself and those around him, and won’t be lowering them anytime soon.

“I was first called a diva by Lee Eaton,” Cully told Boxing News. “He one day said I was a bit of a diva and it stuck. But I think I just like things being done correctly. I’m probably a bit of a perfectionist.

“I like pink as well [he wears pink on fight night], so it all goes together nicely. It seems to be a hit with people.”

A stickler for perfection, lightweight Cully will be ultra-aware his 13-0 (7) record is in danger of being blemished this Saturday (March 12) in Nottingham when he takes a sizeable step up in class against Miguel Vázquez, 44-10 (17).

The Mexican has been deemed past his best for a while now, yet continues to confound the doubters and deceive Father Time. Though 35, the last time he was seen in the UK, back in October 2020, Vázquez appeared extremely unlucky not to get the decision against Lewis Ritson.

“It’s a big step up, for sure,” said Cully. “I know I fought [Viorel] Simion last time out, but he was kind of on the slide and had his best days at featherweight. I’m fighting a guy now who was a [IBF] champion at this weight. Maybe his best days are behind him as well but he’s definitely still a player. He’s top 10-ranked and I’m sure he’s still got some ambition.

“He’s a proper fighter. He’s someone who will fight anybody. You can see that from his record. He’s fought Canelo [Álvarez], [Timothy] Bradley, Josh Taylor, and went up to welterweight and fought [Thulani] Mbenge. He’s a typical Mexican and that awkward style of his can cause people problems no matter what age he is. He doesn’t get hit that often, either. He hasn’t really taken that much damage.”

Whenever facing a veteran like Vázquez, the question tends to be this: what can you do that the men before him couldn’t? Up to now, Cully has watched Vázquez, even in defeat, shrug his shoulders at the threat of other fighters in the UK and knows only Josh Taylor, an established world champion, has defeated Vázquez with any degree of comfort.

“I think he’s probably seen it all by now. This is his 55th pro fight,” said Cully. “When he came to the UK to fight Ritson and Ohara Davies, they both tried to take the fight to him. Ritson kind of plodded forward with no real head movement or footwork and I thought Vázquez won that fight quite comfortably. I think the Ohara Davies one was closer. Maybe he was a bit unlucky not to win, but it was a close fight.

“I’m a 6ft 2ins lightweight and I can box and also punch very hard as well. I think even though he’s had 55 pro fights I’m going to show him stuff he hasn’t seen before. I’m planning on being one of the best opponents he has fought to date and will have a couple of surprises for him on the night.

“I think punch power is going to be a big thing and so is my speed and explosiveness. For my height, people don’t expect that. They expect me to keep things at a distance and try to shut my opponent out. But I’ll be taking the fight to him as well. I like to box but I also like it on the inside and like going to war. It’s probably best when you can mix the two up.”

As a 6ft 2ins lightweight, Cully is asked, often, both how he makes the weight and how much longer he intends to keep making the weight. “I went up to 140 [pounds] for a fight against [Craig] Woodruff a while back [August 2020] and didn’t have to do any sort of weight cut,” he said. “I was eating breakfast the day of the weigh-in and it was a bit strange. I think I’d rather do the cut and feel a little struggle. Compared to other fighters, I still do the weight comfortably.

“I’ve always said from the start that I want to win a world title at lightweight, then move up and try to win one at two or three weights. I think I have the frame to do that now but it will obviously take some time maturing into 140 and 147. Right now, I’m comfortable at 135 and my plan is to challenge for a world title in the next 12 to 18 months.”

As for potential fights, Cully, 26, sees them everywhere he looks. Better yet, he can spot a path – from domestic level to world championship level – that seems not only clear but feasible, even at this relatively early stage in his career.

“You’ve got Ryan Garcia, Devin Haney, and [George] Kambosos, who has all the belts,” said Cully. “You’ve also got ‘Tank’ [Gervonta Davis], [Joseph] ‘JoJo’ Diaz, and Javier Fortuna, who I was looking at a while back as a good fight for me soon. In the UK, you’ve got Maxi Hughes and Ricky Burns still knocking about as well.

“There are so many names I would like to share a ring with. I’m in boxing for the biggest fights possible. I don’t want to be taking nothing fights and easy fights. I want to challenge myself and see how far I can go.”