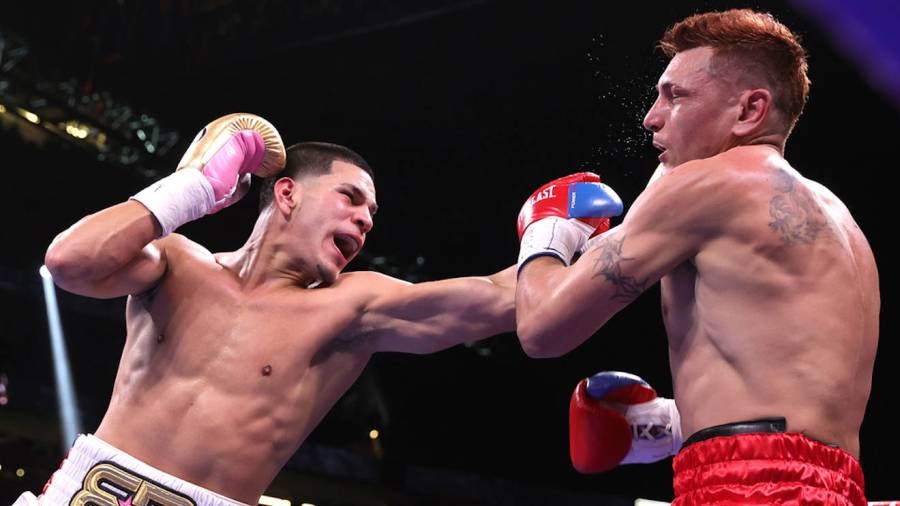 VAUNTED power puncher Edgar Berlanga found himself in an unaccustomed position, flat on the canvas for a good few seconds after walking on to a lovely countering right thrown over the top by Marcelo Coceres. The Argentine had given Berlanga plenty of food for thought, moving from side to side so the New Yorker could not get himself set. Berlanga’s strength still came through, he had tracked after Coceres and slammed in his stern left hook and heavy cross. He shook the Argentine up at times and left him with a right eye wholly closed. Berlanga came away with a unanimous decision win, 96-93 for all three judges, but he is a work in progress.

Robert Helenius proved his first victory over Adam Kownacki was no fluke. The heavyweight from Finland hurt Kownacki, badly, from the first round. He continued to thump in long shots, working slowly but still driving the Pole across the ring when he caught him on the end of his punches. To stave off the onslaught, Kownacki began to go low. He hit Helenius below the belt in the third round, had a point taken off him in the fifth and was straying low again in the sixth. But he was also taking real damage, his left eye swelling shut when the referee stepped in to end it at 2-38 of the sixth round.

“It was good. Either way, it would have been a stoppage. I had a lot of good shots tonight and he didn’t have any,” Helenius said. “I expected it because, what does he have? Don’t get me wrong, he’s a good brawler, but I’ve been fighting brawlers for 20 years. I know how to deal with them, even if they are hitting me low or behind the head. That doesn’t bother me.”

Kownacki was taken for evaluation at University Medical Center afterwards as a precaution.

Also on the Tyson Fury vs Deontay Wilder undercard at the T-Mobile Arena in Las Vegas, Jared Anderson, the rising heavyweight prospect, got to grips with tall Russian Vladimir Tereshkin. He soon began to ply the Russian with crisp rights. He stunned Tereshkin on the ropes and hammered him into his own corner, the referee saving Tereshkin from further punishment with nine seconds left in the second round.

“I was a little anxious in the opening round. My first pay-per-view card and all that. But I settled in and gave a great performance. I practiced what my coaches preached. On to the next one,” Anderson said. “I got great work in the gym with Tyson Fury. Iron sharpens iron.

“Shout out to Toledo, my home. I hope I made the fans back home proud.”

Efe Ajagba, another of Tyson Fury’s sparring partners like Anderson, could not beat Frank Sanchez. The “Cuban Flash,” trained by Eddy Reynoso was not that flashy but he convincingly nullified Ajagba leaving the Nigerian advancing but unable to catch up with Sanchez with his power punches. The Cuban intercepted him with hard rights, Ajagba took many of them but in the seventh round Sanchez dropped him to a knee, only to needlessly blast him over with a hard left hook.

Ajaba was left chasing the bout. He did manage to club Sanchez into the ropes with single rights on occasion but he couldn’t overhaul the Cuban, losing a unanimous decision 97-92 and 98-91 twice.

Julian Williams was meant to be rebuilding after his 2020 loss to Jeison Rosario.  But unheralded Mexican Vladimir Hernandez piled into him, driving his southpaw left cross through the Philadelphia fighter’s guard. Williams began to adjust to him, landing quality right hooks to his chin. Hernanadez was taking damage but he stuck to his task, throwing salvoes of punches, hurting Williams who looked to hold. It was those efforts, sustaining his attacks, that secured him a split decision win, 96-94 and 97-93 for two of the judges, the third had it 96-94 for Williams.

It became clear why Robeisy Ramirez, a two-weight Olympic gold medallist afterall, was kept off the televised portion of the card. He has all the tools a fighter could wish for, slick head movement, fast southpaw punches when he chooses to throw them. Yet he didn’t fight with the intensity familiar to those who watched the Cuban win his amateur gold medals. From the first round he was in control of this contest with Orlando Gonzalez, slipping the Puerto Rican’s shots and slotting in his own. But he fought without intensity, working at one pace and only really attacking with venom in the ninth round. He finished a clear points winner though, taking the decision unanimously 97-93 and 99-91 twice after 10.

Brooklyn featherweight Bruce Carrington started his professional career with a four-round points win over Cesar Cantu. His combination punching impressed. He rocked the Texan with a big uppercut and lined up crosses. Cantu fired back in the last but lost 40-36 for all three judges.

Ukrainian heavyweight Viktor Faust began the evening’s action, putting Mike Marshall down with glancing blows in the second round before dropping and stopping the American in the third. Referee Robert Hoyle waved it off at 1-49.