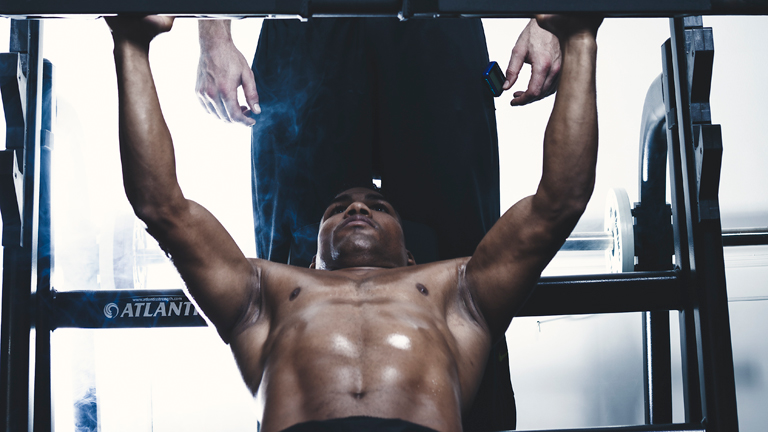 THERE was a time when boxers could be conditioned adequately by practicing the sport, along with hitting punching bags and working cardio with jump ropes. Today the sport demands much more sophisticated training methods because there are so many top-quality fighters.

When it comes to strength training for fighters, its purpose should be to increase functional strength, not necessarily muscle mass. Even so, many boxers fail to achieve the results they expect from a weight training program by performing too many repetitions for each exercise.

Focusing on higher reps in weight training creates excessive muscle bulk with minimal increases in strength, such as the way a bodybuilder trains. The effect is that boxers using these training methods are forced into a heavier weight division without the punching power to justify such a change.

Even if a boxer uses the appropriate repetition schemes, the program will not work if the rest intervals are too short. To develop maximal muscle power, several minutes of rest are needed between sets for the nervous system to adequately recover. That’s why using rest intervals of only 15-30 seconds won’t get the job done. While a protocol of shorter rest periods will help reduce body fat and increase muscular endurance, it forces the athlete to use weights that are too light to create a significant strength training effect.

Unless I am training a heavyweight who would benefit from an increase in muscle mass, I seldom have my boxers perform more than 4 repetitions in a set. One exception would be special structural balance exercises, such as external rotation movements that isolate the rotator cuff muscles of the shoulders (which are muscles commonly injured among boxers). For these exercises I might have my boxers perform 8 or more repetitions – and consider that the range of these exercises is small, so the time under tension for each rep is relatively short). Also, because boxers’ lower back and hamstring muscles are often relatively weak compared to their abdominal strength, exercises such as Romanian deadlifts and glute-ham raises are often included.

At the other end of the spectrum are the Olympic lifting exercises, such as the clean and jerk, which consist of extremely complex movements that involve numerous major muscle groups. Performing more than 3 repetitions of these exercises often creates technical breakdowns that may increase the risk of injury, besides forcing the athlete to use much lighter weights.

While I use numerous exercises with my athletes, several are particularly useful for boxers. Strength coaches call these exercises “predictor lifts,” and athletes should strive to continually improve their performance in these exercises. Predictor lifts for boxing include the incline bench press, chin-ups (performed with weights attached to the body), and split-squats.

What are good results in predictor lifts? If you want to aim for the highest level, consider my fighter Yuriorkis Gamboa, 2004 flyweight Olympic champion, WBA (2009-2014) and IBF (2010-2014) super featherweight  world champion. I progressed Gamboa to the level where he could perform chin-ups with 41 kilos (90 lbs) attached to his waist and could incline bench press 120 kilos (264 lbs) for 2 reps.

Although squats are considered the most effective strength training exercise for the lower body, they can easily add a lot of muscle mass that will force a boxer into a higher weight division. For this reason, I prefer split squats and lunges; they develop the desired leg power with minimal increases in muscle bulk. One exception would be when you’re training a heavyweight fighter, as the extra body mass could work in their favor.

Regarding the Olympic lifting exercises, these are the best exercises for developing overall body power. But these are complex exercises that any athlete should not attempt until they receive instruction in proper technique from a qualified coach.

Having mentioned the exercises I do like, there are a few I believe do more harm than good. For example, standing two-arm horizontal punching exercises with a barbell are especially hard on the shoulders. I also am careful about performing any special exercises for the forearms. Instead, I use thick-handle implements that strengthen these muscles adequately – performing additional forearm work could lead to overuse injuries.

Regardless of the type of exercise performed, I carefully monitor all the training variables, or loading parameters, to ensure the workout provides the precise training stimulus. In addition to the variables I have already mentioned (reps and rest periods), I also consider sets, speed of movement (of each phase of an exercise: eccentric, concentric and isometric contractions), and training frequency.

Training frequency refers to how often workouts are performed. Most of my fighters lift weights four times a week, with each workout lasting about an hour (including warm-up). Any more than that is difficult for a boxer to recover from and can easily result in a state of overtraining that can lead to injury and illness.

From a larger perspective, I alternate training phases between periods of high volume (accumulation) and periods of high intensity (intensification). In other words, we train with higher reps and relatively lighter weights for a few weeks, switch to lower reps and relatively heavier weights for a few weeks, and then repeat the process. More specifically, beginners can stay with one workout for as long as a month before switching, but advanced athletes respond better to changes made as frequently as every two weeks. Such variety helps prevent overtraining and ensures optimal progress.

Boxing is a sport that requires great strength, but it’s simplistic to think that the win always goes to the strongest fighter. Training smart is as important as training for strength, and that’s why fighters need to carefully consider exercise selection and program design. It’s not about training with pain but training with brain.