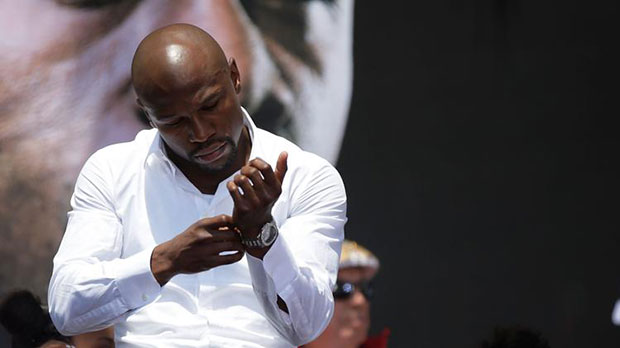 SO what’s cooking at Floyd “Money” Mayweather’s training camp ahead of his May 2 showdown with Manny Pacquiao?

“Whatever it is it sure sounds expensive,” said Hall of Fame trainer Freddie Roach.

Roach is training Fighter of the Decade and boxing superhero Pacquiao, 57-5-2 (38), for his welterweight world championship unification battle against the undefeated Mayweather, 47-0 (26) which will take place Saturday May 2, at the MGM Grand Garden Arena in Las Vegas.

Roach, recently named Trainer of the Year for a record seventh time by the Boxing Writers Association of America (BWAA) was responding to reports that Mayweather had hired renowned Las Vegas-based Chef Q to provide training camp regal repasts – at $1,000.00 per meal.

“I hope she knows how to make crow and soft foods palatable because after he faces Manny that is all Mayweather will be eating,” continued Roach.  “I’ve read that Chef Q will be preparing meals high in protein which is perfect because Floyd is going to be eating a lot of ‘Leather a la Manny’ and it will be served piping hot.  Thousand dollar meals, give me a break. Floyd is getting his just desserts on May 2.”