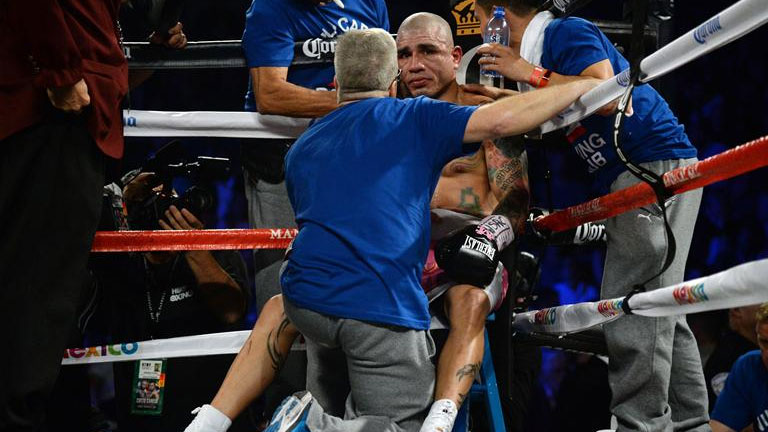 Miguel Cotto's performance against Canelo, the decision, and his future are discussed

MIGUEL COTTO opted not to speak to the media after losing to Canelo Alvarez over 12 rounds in Las Vegas, leaving his trainer Freddie Roach to field questions about his performance, the verdict, and his future. The trainer was annoyed with the wide scores (119-109, 117-111, 118-110) in the Mexican’s favour and felt that Cotto had done enough to win.

“I thought my guy fought a good fight,” said Roach. “We had a gameplan to outbox him and I thought we did that. His [Cotto] defence was impeccable and he threw lots of good combination. I don’t know what those scores were about. It was a good, close fight, a competitive fight and it was good for boxing. I thought we had the edge at the end but it went the other way.”

“I thought Miguel was using the jab very well but I thought he should have backed him up a little bit more. We might have had more success than that. But I still think we outscored him.

“He [Canelo] was the bigger guy and he was coming forward but coming forward doesn’t mean you win the fight. He threw a lot of shots and landed some but we landed a lot. I’m not a judge, but I thought he [Cotto] won.

“In the 10th round I was talking to HBO and I wasn’t at all concerned [about losing]. There’s four members in our team and not one of them thought he lost the fight. The scoring was bad. There’s no f****** way we lost by that much. We won the fight.”

Cotto’s famed left hook was used sparingly against Alavrez but Roach claims that was all part of the plan.

“The jab was the key,” said Roach. “Because we were jabbing more, we wouldn’t throw the left hook as much. The jab and right hand worked sometimes but not others. Maybe we should have thrown the hook a bit more. But we fought our fight, we did good.”

The subject predictably turned to 35-year-old Cotto’s future after this latest defeat.

“He still has a future in boxing,” said the trainer. “He has a couple more fights in him if they’re the right fights, but he’s had a great career so we’ll see. He works so hard in the gym and I don’t think it’s over but we will have to discuss that. We’ll have a long talk about it and make a decision. I care about my fighters and if it’s over, it’s over.”