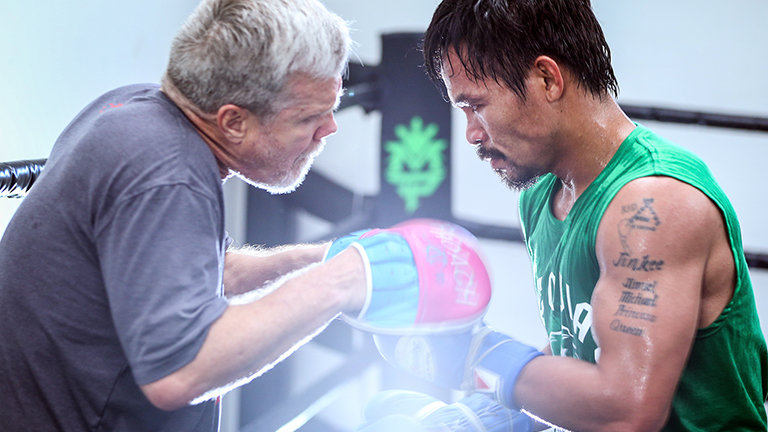 If Manny Pacquiao continues fighting after the Timothy Bradley rubber match, Freddie Roach wants him to drop down a division

HALL OF FAME trainer Freddie Roach believes that his fighter, Manny Pacquiao, is not currently campaigning at his optimum fighting weight. The Los Angeles-based coach is of the opinion that Pacquiao – who battles Timothy Bradley for the third time in Las Vegas this Saturday (April 9) – would be best served competing at super-lightweight, rather than welterweight, the division in which he currently resides. However, any such talk would prove obsolete if Pacquiao goes through with his well-publicised intention of retiring from boxing after the Bradley clash.

“If Manny does end up fighting again [after this weekend’s bout], I hope it’s at 140lbs and not 147,” Roach opined. “Manny’s a much better puncher at 140 than 147. That’s what I attribute to why he hasn’t knocked anyone out in a long time [since Miguel Cotto in November 2009] – because he’s been fighting at the higher weight. It’s not that he’s not hitting as hard as he used to, it’s just that he’s not that big a person at 147. Manny could still make 135 if he wanted to. He walks around at about 138, so 135 would be no problem. I think a move down in weight could prolong his career, if he does decide to fight again. There are some big fights at 140, against Terence Crawford and those sort of guys. I think Manny’s best fighting weight is 140.”

Roach’s comments suggest that the possibility of Pacquiao backtracking on his plan to retire is not far-fetched. Freddie admits that the 37-year-old Filipino icon took a while to get into his groove during training camp for the upcoming Bradley contest, but believes this could in fact prove to be beneficial for Manny come fight night.

“We had a bit of a slow start to camp, which had a lot to do with Manny’s long [injury-enforced] layoff [after the Floyd Mayweather fight in May],” Roach said. “It was very hard for Manny to get going again in camp this time. He really didn’t peak in camp until the last two sparring days. Then the firepower came along and everything came together. We had to wait a little longer than usual for that moment to come along, but it did happen.

“Manny’s in great shape, and he seems a little bit more aggressive than he has in a long time. His religion had an effect on his [diminishing] aggression in the ring, but I think he’s realised again that the fans like to see knockouts. I like where he’s at right now, although it took a little bit longer for him to get to that point than it has in the past. Getting older is part of that equation. It’s probably a good thing that he came on late during this camp, as it means that he wasn’t able to overdo it.”

Whenever Pacquiao does decide to hang up his gloves, according to Roach, he can do so content in the knowledge that he has left a lasting legacy in boxing, through his outstanding accomplishments in the sport. Furthermore, due to his various interests outside of being a professional fighter, Freddie believes that when the multi-weight world champion chooses to call it a day, he won’t yearn for a return to the ring.

“If Manny does decide to retire after this next fight, he can do so happily, because he’s had a great career and he’s also got something to fall back on,” Roach stated. “That’s what I like about the situation. Most fighters return after retiring because they don’t have something else to fall back on. That’s not the case with Manny. When he retires, he’ll be happy in his political role, helping the people of his country. He’s also currently got a monthly boxing show in the Philippines as a promoter, so that’s something else he can concentrate on in retirement.”

Having trained Pacquiao since 2001, Roach knows the ring legend better than most. Reflecting on their long-time partnership, Freddie picked out his favourite ever fight of Manny’s, as well as highlighting what he thinks of him from a personal standpoint.

“My opening impression of Manny [when he first entered Roach’s Wild Card gym] was that he was special,” Freddie recalled fondly. “After watching him spar one round, I said to myself, ‘Wow, this guy can fight.’

“Before Manny fought Lehlo Ledwaba in 2001, I was telling everyone that Manny was going to destroy this guy, and they all just laughed at me. They all thought Ledwaba would be way too much for him, but Manny stopped him in six rounds. That’s still one of my favourite fights with Manny, but my overall favourite is when he dominated Marco Antonio Barrera the first time, as Barrera was considered the pound-for-pound number one back then. I’ve got lots of great memories with Manny, but those two stand out.

Pacquiao was heavily criticised in the media for infamously making disparaging comments about homosexuals in February, yet Roach is adamant that his charge is a man who embraces everyone.

Freddie said: “Manny’s had a great career and so forth, but as a person, he’s the best guy in the world. He’s the most generous, fair and nice person I’ve ever met in my life. The only way Manny will end up spending all of his money is if he gives it all away – he’s that generous. He’s not prejudiced against anyone. He treats everyone fairly and he loves everybody. I think he’s the best person I’ve ever met as a human in my life.”