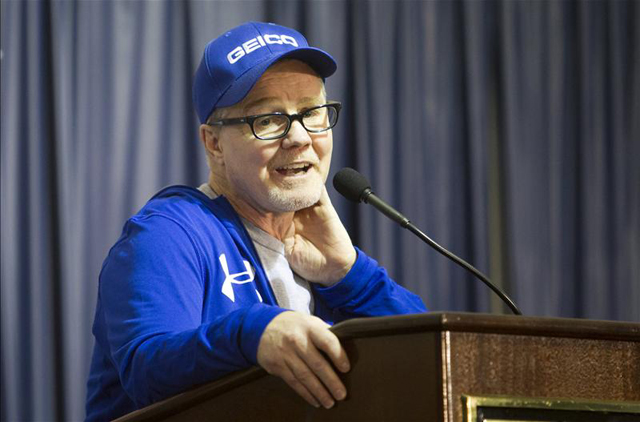 After one last run and one last gym session today, Manny Pacquiao is ready to weigh in for the Floyd Mayweather fight, writes John Dennen

MANNY PACQUIAO’S trainer Freddie Roach expects Floyd Mayweather to come out strong early in their May 2 fight and try to knock out the Filipino icon.

“That’s what I would do,” Freddie reasoned.

In 2012 Pacquiao suffered a crushing knockout loss to Juan Manuel Marquez, a precedent Floyd Mayweather Snr has already referenced. Manny’s trainer reckoned Floyd would have noted, not the knockout itself, but the first knockdown and Roach suggested that might prompt Mayweather to come out with uncharacteristic aggression. “I wouldn’t watch the Marquez fight so much about the knockout, I would watch the first knockdown in that fight,” Freddie said. “Floyd has seen that Manny got hit by that big overhand right.

“It’s a shot that he shouldn’t have got hit with.” Plus, Roach added of Mayweather, “He can punch when he wants to.”

“I think he’s going to come out in the early rounds and try to knock us out and we’re prepared for that,” Pacquiao’s trainer continued. “But I’m not sure. He could run all night. I have fallen asleep in a couple of his fights before.

“He’s well prepared for if Floyd moves or if Floyd comes to fight. If [Mayweather] wants to run, we will cut the ring off.”

Roach is adamant that Manny has shrugged off the effects of his last loss. “Marquez is a great counter-puncher. He fought us four times, he learned a lot about us those four times, I think he’s a smarter fighter than anyone else out there and he knew what to do when Manny stepped on his foot. Manny was stepping in for the kill, he stepped on his foot, lost balance a little bit. I tell my fighters just the same thing. If someone steps on your foot you hit him as hard as you can because he’s right in front of you and that’s what he did. It worked. I won’t say it’s lucky, it was well-planned and those things happen. Manny knows that,” his trainer explained. “It’s part of the sport.”

Pacquiao rebuilt with victories over Brandon Rios, Tim Bradley and Chris Algieri. Perhaps the Filipino is the rare breed of boxer who can recover from a loss like that and rise again. “When we were in the gym there were no flaws, no changes, he wasn’t gun shy,” Freddie noted.

Roach also suggested a knockout wouldn’t be crucial for Pacquiao, who does normally fight with an aggressive style. “I really think we can win a 12 round decision here. That’s what my gameplan is, is to outscore him. I think Manny’s fast combinations can do that. But if he stays in the pocket too long he will get hit back,” Freddie said.

Mayweather hasn’t actually won inside the distance since Victor Ortiz carelessly dropped his guard in 2011, while for Pacquiao’s last stoppage victory you have to look all the way back to 2009 for Manny’s TKO win over Miguel Cotto. Even that, one of Pacquiao’s great triumphs, was fuelled by emotion and a hint of craziness. The corner, Roach admits, can be hard to control. Against Cotto Manny went to the ropes and the trainer noticed Pacquiao’s friend/translator/assistant, Buboy Fernandez had burst into tears. “I said why are you crying? And he said because you told him to get off the ropes. I told him we’ll take care of that. Manny said I want to see how hard he hit. I said well I don’t think that’s a good idea. He said I can take his punch,” Freddie explained. “It does get a little funny sometimes.”

Fun has been an element of this training camp, even though they have been preparing for the most important fight of Pacquiao’s career. “From day one since this fight was announced he’s been really happy, we’ve had a great training camp, we’ve had a lot of fun. We always have fun in training camp. This is isn’t a job, this what we love to do. It’s fun for us,” Roach revealed. “We’ve had a good training camp, Manny really listened very well.

“We’re on the same page, we know when it’s time to fight we’re ready to fight. I think he’s going to do it.”

The final elements were put in place today. Pacquiao went for a run in the morning, which Roach wanted to be light, half running, half walking. “Pacman” wanted a session in the gym in the afternoon (ahead of his last fight Pacquiao also put in a stint in the gym the day before the weigh in). He is well under the welterweight limit. “He wants to shake out with me in the gym today and have a little workout, work up a sweat. He was down at 144lbs yesterday,” Freddie noted earlier. “So I said the workout today is not going to be too heavy. After that he’ll have breakfast tomorrow and then get on the scales.”

With the weigh-in tomorrow, there is one day left to go. The fight of the century is almost at hand.