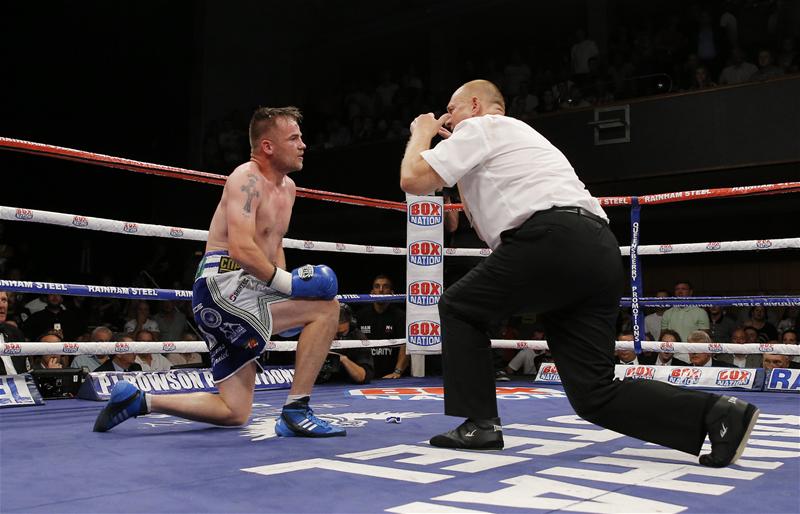 Frankie Gavin stepped into the ring on August 1 to face his toughest test to date. The skilful southpaw stepped up to take on the experienced European champion Leonard Bundu. The fight turned into a war and a knockdown in round six proved to be the decider in a fight which ended in a split decision in Bundu’s favour.

After suffering your first defeat how long are you going to take off before getting back into the gym?
I spoke to [promoter] Frank [Warren], hopefully I’ll be back in the gym within a week or two. I’ve got two fights in my contract before the end of the year, and I want to fulfil them. It’s not like [Leonard] Bundu beat me up or knocked me out, there was a little cut that seems to be nearly healed already. So I’ll be ready to go full steam ahead next week.

Have you watched the fight back? If so, what do you think of the decision?
Yeah, I still think I won. I landed the cleaner shots for sure, but I can also see with his aggression why the judges edged him. It was a good fight, but in the end I believe in my heart of hearts I won it.

How significant do you think the knockdown was? And how much did it take to get up from that?
I don’t like losing; I did not see it coming. It caught me right. It put me down, but as I’ve said before you’ll have to knock me out cold to keep me down. I proved that. I got hit with a s*** body punch and I got up, my will to win is just too big, I love winning. I did everything I could to win, but sadly it was not enough on the night.

How, if at all, will you change your training set-up following this setback?
I’ve signed with Matchroom and I’ve sacked my trainer… [Laughs] No, I have not really. What my coach [Tom Chaney] told me was right, what lost me the fight was that I was on the ropes too much. To be honest that was the game plan before the fight, to stay off the ropes. But in rounds six, 10 and 11, I stayed on the ropes too much. But you learn from these mistakes, and I will do.

Kell Brook sent you a supportive tweet in the wake of the defeat, did you see it and what did you make of it?
It was very nice, very nice of him. Look, when I said [Shawn] Porter would beat [Brook], it’s not that I want him to beat Brook. I want Brook to take his head off. I want Brook to win easily. All I was saying was, if I was a betting man I would pick Porter. It’s not a straightforward fight for Porter though. I was not trying to have a dig or insult Kell. It was just my opinion.

In contrast, Amir Khan was critical off you following the defeat; what do you make of that?
It shows what he is. It really does. I’ve known him since I was 15 or 16, and I have never said a bad word about him. I never once put him down. Not when he got knocked out. Not once. The only difference between us is when I got knocked down I got back up; he did not.

What impressed you about Leonard Bundu and did he exceed your expectations?
No he did not. Look, he is a good fighter. I would say he is above European level. No one can say he is better than me. The fight could have gone either way. He is not better than me. I never got outclassed. There are a few critics saying I am a British-level fighter. I am above that. I’ve beaten all the British-level fighters. I proved I’m at European level at least. I hung in there, and on another day the fight could have gone my way. [Bundu] has had other fights at that level. That was my first one. I can only get better.
How much did the cut in the seventh affect you going into the later rounds of the fight?
It was affecting my eye. No excuses though, he cut me. I thought it was from a clash of heads. It was ruled a punch. Maybe it was a punch. At the end of the day it’s one of those things, you’re boxing. You get cut, you get cut. You get on with it, that’s boxing.

What do you make of Bundu’s financial demands for a rematch?
It sounds like he does not want it. I am here, if he wants it, I am here. It can be done. Although I think he has got a good enough backing to get a [world] title shot. If he can’t then I am here, let’s do it and he can get a decent pay-off.

Is going down to light-welterweight something you have considered and how would that change your style?
I have not even thought about it. I am not going to think about it. Look at the weigh-in, look at me to Bundu. I’m a fully-fledged welterweight.

At which level do you see your immediate future?
I want to come back at European title level. Or a rematch with Bundu, that’s what I want. I also heard Bradley Skeete wants it now. If that is my mandatory for the British title then so be it. I will take care of business there and then I will go back up to European level.

If Bundu vacates to chase a world title shot, could you see you and Lee Purdy fighting for the European title?
Purdy does not deserve to be back in there. He has been out all this time. He lost to [Devon] Alexander, he lost to Bundu and he lost to Colin Lynes. I think there are more deserving British and European fighters out there. But if that is the case I will fight him no problem. I don’t think he deserves it though, he did not deserve his last European shot, and he did not deserve his world title shot. He is not even in the top three in Britain. But as I said, I will fight him no problem.

Colin Lynes has also expressed an interest in fighting you, would you consider that fight and how would it pan out?
[Laughs] Colin Lynes is an idiot! Bradley Skeete annihilated him in his last fight. He can talk a good fight. But we all know his best days are far behind him. He does not like southpaws. He can talk a good fight because he likes a payday. If Frank [Warren] says to do it, I will. Apart from that I have absolutely no interest in Colin Lynes.