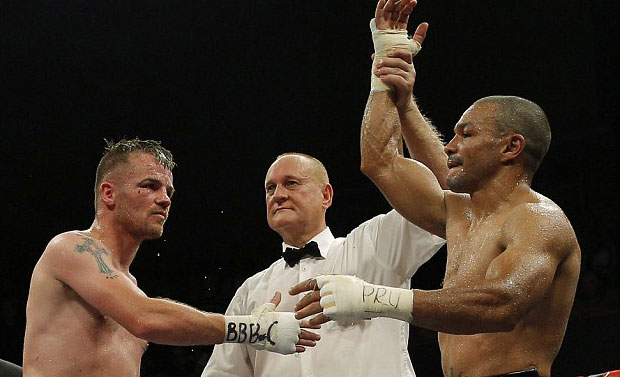 FRANKIE GAVIN answered a lot of questions about his character on Friday night at Wolverhampton Civic Hall and, in the process, showed he could dig deep, come through a crisis and be in an incredibly exciting fight.

Unfortunately all of that will be scant consolation to Birmingham’s British welterweight king and former amateur star after Gavin suffered the first loss of his professional career.

Using deft movement and precise punch-picking, Gavin dominated the first five rounds of his challenge to European ruler Leonard Bundu – the Italy-based Sierra Leonian – but a devastating body-shot knockdown suffered in the sixth changed the whole fight. Gavin was dumped heavily to the canvas by Bundu’s left hook downstairs, rolled onto his front and then appeared to intentionally remove his gumshield – he later said he felt he was going to be sick if it had stayed in. Gavin showed immense bravery to get up at the referee’s count of eight and the time-out to have the mouthguard rinsed and replaced took him pretty much to the end of the round.

This success inspired Bundu in the 12-rounder’s second half and he piled on the pressure. Gavin, now slowed, did his best to stick and move and seemed to find a second wind as Bundu tired in the last three sessions. Alas, the judges deemed it insufficient, as they tallied two scores of 114-113 for Bundu against a 115-112 in Gavin’s favour.

Bundu thus retained his continental crown and – by virtue of his African heritage and much to Leonard’s surprise during the post-fight announcements – also took Gavin’s Commonwealth belt. Gavin was predictably crestfallen at the verdict – he felt he had done enough – but there are more positives than negative to extract from his performance. Promoter Frank Warren hopes to tempt Bundu – a real gentleman after his win – into a rematch of what was a great fight played out in front of a rabid, sell-out crowd.

The 12-round chief support saw strong but limited Australian heavyweight Lucas Browne outscore the equally unrefined, but almost as game, Ukranian Andriy Rudenko. It was a messy, mauling, gruelling affair, won by Brown 117-112, 115-113 and 116-112.