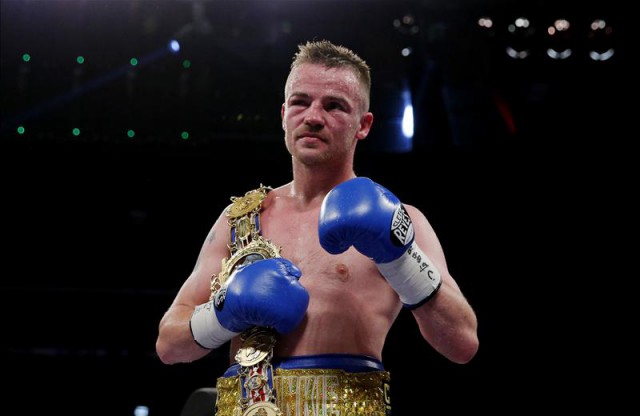 Gavin will box in Sheffield on March 28, then in his Birmingham hometown on May 9

Gavin will debut for his new handlers on March 28 in Sheffield, on the undercard of Kell Brook’s first IBF welterweight title defence, against his mandatory challenger Jo-Jo Dan. Then Britain’s only male World amateur king will appear again on May 9 in Birmingham at the Barclaycard Arena (formerly NIA), with local middleweight Matthew Macklin returning on the same bill from his surprise defeat to Jorge Heiland. Kal Yafai and Sam Eggington are also slated to appear on the bill.

“I can’t wait to get going with Matchroom,” said Gavin. “I don’t think many people have seen me fight recently but I am back in Birmingham and back on Sky Sports and the sky is the limit.

“The fight against Kell Brook is the aim for me. I am number five in the IBF rankings and he is the champion, hopefully by the end of the year or the start of 2016 I can fight him for the title.

“You’ve got Matthew, the Yafai brothers and Sam on the May 9 bill already – we’re all from different parts of Birmingham and we’re all going to bring great support to the shows, there’s going to be space for a lot of young local lads to get on the bill and make a name for themselves so it’s great news for boxing in Birmingham.”

“Firstly to Frankie Gavin – welcome to the team!” said Hearn. “Frankie has long been one of the most talented fighters in the country and now it’s time to shine. I haven’t seen him smile for a long time and now it’s ‘Funtime’; time to enjoy his career, the exposure and the big lights. Frankie will defend one of his three titles on the huge Kell Brook card on March 28 at Sheffield Arena and then headline at the NIA in Birmingham on May 9. I have lost count of the number of tweets and messages I have had asking us to come to Birmingham and now the waiting is over!”